The Supercommittee Can Do It 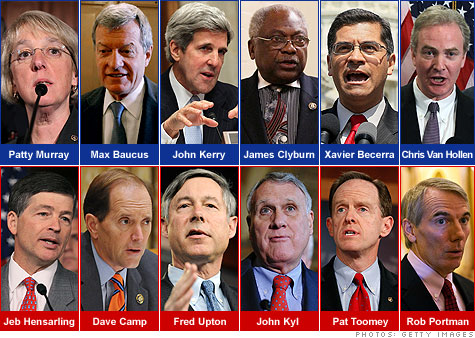 I didn’t like the supercommittee when I first heard about its creation. I thought it was an abrogation of the regular order. I thought it was awkward legislatively. And I didn’t think it was going to work. But I am starting to warm to the idea. In fact, I am getting downright optimistic about its prospects.

While some believe that the supercommittee is destined for a super failure, I now believe that this bipartisan, bicameral panel of 12 members is going to produce something historically large, which will include far-reaching tax reform and long-term entitlement changes. Here are five reasons why I am getting more bullish on its prospects:

• The Members: Both Republican and Democratic leaders took great care to name members of the supercommittee who are both loyal to their team and pragmatic in their deliberations. While the co-chairmen, Rep. Jeb Hensarling (R-Texas) and Sen. Patty Murray (D-Wash.), tend to be partisan and ideological, there are plenty of deal-cutters in the room. Republicans, who can easily make the case that any deal is better for Obama, have instead leaned forward by putting proven workhorses like Sen. Rob Portman (R-Ohio) and Reps. Dave Camp (R-Mich.) and Fred Upton (R-Mich.) on the committee. I believe that Senate Minority Leader Mitch McConnell (R-Ky.) and House Speaker John Boehner (R-Ohio) want to get something done, even if a big deal helps the president politically. By putting Sen. Max Baucus (D-Mont.) on the committee, Senate Majority Leader Harry Reid (D-Nev.) has also signaled that he could find a deal to be acceptable. House Minority Leader Nancy Pelosi (D-Calif.) is the lone holdout, but presumably the president could put enough pressure on her picks to get a deal if he wants one.

• The Staff: By appointing Mark Prater, a longtime Republican Finance Committee staff director, to lead the committee from the staff side, the joint leadership took a crucial first step in achieving a deal. Nobody knows more about the inner workings of government than Prater, and nobody has a better reputation on either side of the aisle. Prater wouldn’t be doing this if he thought it was a waste of his time. And by appointing a well-known tax expert, the joint leadership, including the Republicans, have signaled that comprehensive tax reform is not off the table.

• The Business Community: This might be one of those rare times that Big Business decides to put the national interest in front of their own narrow special interests. Let’s face it. Unless America gets its political act together, the business climate in the United States will deteriorate significantly. Indeed, more and more business leaders are stepping up and saying that we will gladly trade our loopholes for a flat rate that brings more certainty to the marketplace. They also understand that a bankrupt federal government is not good for anybody. Look to business leaders in Washington and in local communities across the country to subtly (or not so subtly) push their members to make a deal that includes tax reform, even if such a deal increases revenues.

• The American People: The voters say they want less spending, and this time they mean it. Really. Earmarks became toxic back home, which made it easier to ban them in the Congress. When members go home, they hear an earful about how Congress needs to cut more spending. This has created an interesting dynamic in our political culture. It is now far easier to cut federal spending than it has ever been. While interest groups will undoubtedly run ads protesting this cut or that cut inside the Beltway, my guess is that those ads won’t have much impact on any campaign. Voters want federal spending cut, and the politicians have received the message, even the Democrats.

• The Process: The supercommittee has a unique and extraordinary advantage that makes action more likely: an expedited procedure. By giving the final package a sure pathway to the House and Senate floors for consideration, congressional leaders have taken away almost all obstacles in its way.

There is some disagreement about which American politician first asked the iconic questions: If not us, who? If not now, when? Some say it was Robert Kennedy. Others say it was George Romney. But there is no disagreement that the time has come to make real progress in putting our fiscal house in order. The supercommittee looks to be the “us,” and “now” seems as good a time as any. The time is right for a big deal, and the supercommittee is the right venue to make that happen.