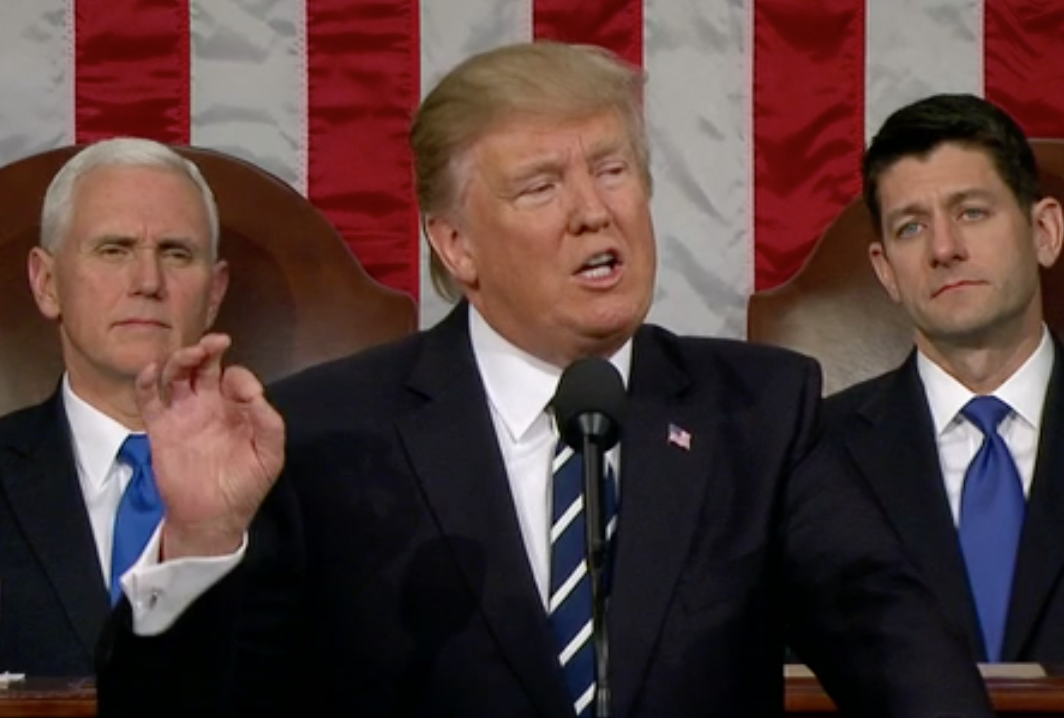 It was a helluva speech.

It started well with a nod to black history month and a condemnation of the racist idiots among us who do dumb, dangerous and criminal things.

It recounted the promises made and kept in the first 30 days of his Administration.

It had a consistent theme throughout.  Make America Great again by sticking up for the American people.

It had surprisingly eloquent moments and powerfully emotional ones as well.

It was bold, with big promises and a clear vision of the future.

The Democrats looked small and silly.

They hate Trump for winning the election and they hate him for stealing their issues.

He talked about Fair Trade.  That used to be their rhetoric, more specifically Dick Gephardt’s rhetoric from the 1980’s.

He talked about reviving the inner cities, cleaning up crime and improving schools for blacks and Latinos.  Those are Democratic constituencies.  How dare he try to help them!

He talked about jobs for union workers.  Buy American steel and build American pipelines.  The entire Democratic super-structure is built on the backs of the labor movement.  Trump is a clear and present danger to their future as a political party.

He talked infrastructure.  He wants to spend a trillion dollars on roads and bridges.  Democrats have been talking about this for a decade.  Now, they are trying to figure out how they can avoid voting for stuff that they have promised their constituencies.

He talked about paid family leave and affordable child care.  The left wing, who has been advocating for this for decades, don’t know what to do with this, other than to say that the President really doesn't want to do this.

There was plenty of red meat for Republican constituencies.  He wants to repeal Obamacare.  And then replace it.  Republicans love that.

He wants to fight crime, especially crime perpetrated by illegal immigrants.  Republicans love that too.

He wants to increase spending on national defense.  That made John McCain, one of his most bitter critics, especially happy.

How to pay for all of this? Trump wants to cut wasteful spending.  Of course, the numbers don’t add up, but if the economy grows at a 4% rate, who cares?

So, there was plenty in the speech for Republicans to love and for Democrats to fume about.

It was President Trump’s coming out party.  He actually looked like a President.

Let’s hope he uses the momentum from that speech to crack some heads on the Hill and get Republicans to unify on health care, taxes and immigration.  Once he clears the decks on those big-ticket items, he can move on an infrastructure plan that will rebuild America and get some Democrats to vote with him in the process.

This was a good speech.  Well done, team.