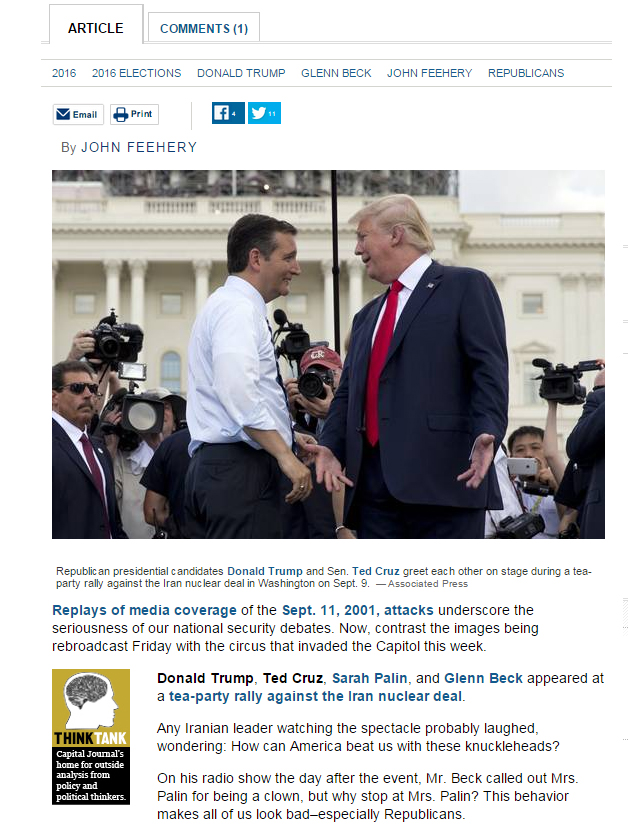 Replays of media coverage of the Sept. 11, 2001, attacks underscore the seriousness of our national security debates. Now, contrast the images being rebroadcast Friday with the circus that invaded the Capitol this week.

Any Iranian leader watching the spectacle probably laughed, wondering: How can America beat us with these knuckleheads?

On his radio show the day after the event, Mr. Beck called out Mrs. Palin for being a clown, but why stop at Mrs. Palin? This behavior makes all of us look bad–especially Republicans.

The crowd was less than serious: One rally attendee carried a punching bag that had the image of our president’s face plastered on it. Another wore a Captain America costume. Yet another carried a sign that said “POTUS in bed with those who behead.” But none of those people is seeking public office. Now, consider the behavior displayed by some 2016 presidential candidates.
Sarah Palin and Duck Dynasty star Phil Robertson during a tea-party rally in Washington on Sept. 9 against the agreement on Iran’s nuclear program. Associated Press/Sipa
Mr. Trump called the folks who negotiated the Iran nuclear deal “very, very stupid people.” And the crowd lapped it up.

Sen. Cruz took a familiar tack, improbably blaming the Republican leadership in Congress for not having the votes to override a presidential veto–as though there is a secret sauce that would make Democrats vote with Republicans but the GOP leadership decided to lock it away.
Sen. Cruz loves to hammer House Speaker John Boehner and Senate Majority Leader Mitch McConnell for their inability to deliver impossible things. He makes promises that he knows the leadership can’t fulfill, and then he blames them for their failures.

It’s a neat trick for somebody who wants to set up his own team for failure time and again.

Whatever you think of that kind of politics, in the context of national security this sort of behavior trivializes serious matters.

The Iran nuclear deal is serious business. There is no slam-dunk outcome. No one is excited about giving the Iranian regime access to billions of dollars it can spend on terrorist activities. On the other hand, nobody wants to go to war with Iran. These weighty issues get lost when serious debate is trivialized by rallies featuring demagoguery.