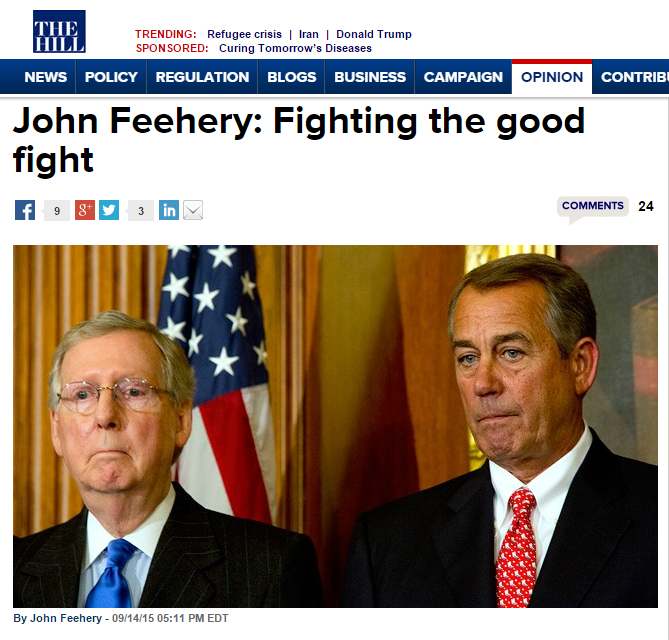 First it was ObamaCare. Then it was immigration. And now, it’s Planned Parenthood.

So many who constitute the Tea Party wing of the Republican conference want to see their leaders wage war against President Obama.

They want to see a good fight.  They want to see Congress use the power of the purse to defund and destroy key liberal initiatives, mostly those initiated by the former senator from Illinois.

The leaders want to wage a good fight, too. They don’t want to be seen as kowtowing to Obama. They use heated rhetoric to register their disgust with the president’s priorities. They sympathize with their political base.

But to some on the hard right, that loaded language sounds awfully similar to promises that can’t possibly be kept, which gives them an opportunity to call out the “establishment” for lying to the voters.

Of course, agreement on principles doesn’t mean there’s agreement on tactics. And while Republicans leaders are many things, they are not kamikaze pilots.

Mitch McConnell (R-Ky.) is the most conservative majority leader in the history of the Senate. John Boehner (R-Ohio) is pro-life, pro-gun, anti-earmarks, anti-spending, pro-tax-cutting, and an original member of the Gang of Eight.

I venture to say that when it comes to ObamaCare, the leaders hate it as much as their followers. The president’s executive order on immigration offended the leaders, not only on policy grounds but also as a matter of the constitutional probity. And for Boehner, who invited Pope Francis to address the Congress, the actions of Planned Parenthood pierced his Catholic soul.

But there are good fights and there are stupid fights. And unfortunately, some on the hard right, including some members of the so-called Freedom Caucus and, yes, one particular presidential candidate, mistake stupid fights for good ones.

Those sitting on the Supreme Court, bless their hearts, rarely intervene in spats between those two branches. That was certainly the case when it came to ObamaCare. It’s uncertain how they will rule on immigration. And as far as abortion, they most likely will not overturn Roe v. Wade.

Shutting down the government works sometimes. Democrats were able to get George H.W. Bush to relent on some things during budget talks in the early 1990s. Republicans were able to win a balanced budget during an extended shutdown in the mid-1990s, although, politically, Bill Clinton won huge.

But those fights were budget-related, not policy-centered.

Shutting the government down as an extortion technique is not a good fight. And unfortunately for congressional Republicans, that is how their latest efforts to play shutdown politics have been perceived by the American people.

The Senate majority leader and the House Speaker have made the calculation that Obama is not somebody that they can do business with. The philosophical gulf between them is just too wide. The president is also not a particularly good negotiator. He tends to sabotage good-faith talks and often leaves his partners in the lurch.

But the president is a pretty gifted communicator, and given the opportunity, he will have a field day with Republicans if they shut the government down over Planned Parenthood.

Some on the hard right want to see their leaders go all William Wallace on the president. They want to see an aggressive and unwise charge, which may exhilarate the masses but would deliver the White House to the other side.

Under our constitutional system, we don’t have room for Bravehearts. And please remember, at the end of that movie, the hero was drawn and quartered.

Taking action now that will lose the White House (again) does not make for a good fight. McConnell and Boehner get that. I wish Ted Cruz and his friends would.