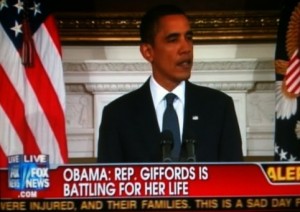 We live in a violent country.

It has always been thus.

We were founded in bloody revolution, we were enlarged through a series of conquests later called Manifest Destiny, and we were forcefully unified in a terrifying civil war.

We glory in the wars we won (World War I, World War II, the Cold War) and we despair about the war we lost (Vietnam).

The Second Amendment to our Constitution grants us the right to bear arms, giving the people the ultimate power to decide whether they want to keep this Republic or toss it asunder.

Murder is fairly commonplace in certain parts of America.

Dramas and reality shows about murder are broadcast daily. CSI, Law and Order, 48 Hours and a host of other television shows graphically depict Americans killing one another with routine regularity.

All that being said, it is still very rare for someone to take a shot at a Member of Congress. The last Representative to die from a gunshot was Leo Ryan, and he was killed in Guyana, not in America.

In the last century, only two Senators were assassinated, Huey Long and Robert Kennedy, and they were larger than life figures that transcended the role of the traditional Congressman.

That is why the attack on Representative Gabby Giffords is so jarring. She was doing her job, representing her constituents, and by all accounts, she was doing it well.

As someone who worked in Congress for 15 years, I saw first hand the kind of threats that were handled routinely by the House Sergeant at Arms. I saw the increasing precautions that Capitol Police and the members of Congress themselves had to take to protect themselves from these threats.

In fact, I saw first hand what happens when a crazy person gets a hold of a gun and decides to attack a member of Congress. Russell Westin came into the office I worked in and killed two police officers in an effort to kill Majority Whip Tom DeLay. I still hear those shots in my dreams on occasion.

My suspicion is that this character that killed 6 yesterday and almost succeeded in killing Ms. Giffords is similarly deranged.

The political atmosphere probably didn’t help things, but it is not the proximate cause.

We have seen this kind of senseless murder before. We saw it at Virginia Tech. We saw it in Columbine. We see it crop up at postal facilities, at court houses and at inopportune places across the country.

Sometimes, these deranged killers give us advanced warnings. Sometimes they post incoherent rants on YouTube or on Facebook. Sometimes they get kicked out of school or fired from a job or are released from an insane asylum.

But in all cases, they fall through society’s cracks, and they enter a wasteland, where all reality is suspended and all morality is twisted. For some reason, these people are able to gain access to weapons, and then they are able to wreak havoc on stable and civil society.

Some politicians will seek to gain some advantage because of this tragic event. Some commentators will seek to shift blame. Some pundits will seek to pin the blame on deeper political forces. The Left will blame Rush Limbaugh and Glenn Beck. The Right will blame Barack Obama and Keith Olbermann.

To me, this whole blame game exercise is frustratingly pointless.

It is the wasteland that is to blame, the place that gives power to the deranged to destroy our world and to slay innocent victims in merely a moment. It is this wasteland we must confront.