The War on Bacon 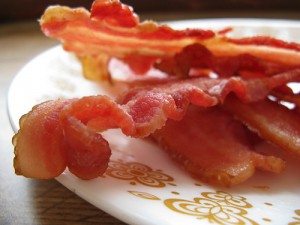 An interesting story caught my eye in the New York Times today, about the rise of a radical right-wing group in, of all places, Sweden.

Swedes are concerned that they are losing their national character because of the high influx of immigrants from Muslim countries. The Times noted the resentments of one typical Swedish family:

“Michael Ahlgren, who lost his job as a security guard for the Red Cross just before Christmas, wears a tattoo of the Swedish flag on his shoulder and voted for the Sweden Democrats, a nationalist party that shocked the country by winning nearly a quarter of the votes for the city council here in 2006. He and his wife are outspoken in their resentment: the government spends money on refugees, they say, but their daughters’ school lunches have barely any vegetables and, to accommodate Muslim religious practice, no longer offer pork sausages.”

The lack of vegetables doesn’t seem like that much of a big concern. The pork sausages? Now, that is a reason to get mad.

This is not just Swedish problem. It has spread to the United States.

My wife’s uncle works for the Chicago Public School system, and he told me that the public schools don’t serve any pork product, including, get this, bacon. He said because of the relatively high percentage of Muslims in the Chicago schools – and the fact that many African-Americans don’t eat pork – kids get robbed of bacon with their breakfast and ham with their lunch.

This is what happens when a school system aims for the lowest common-denominator. What we have here is a war on bacon.

I cannot sit idly by and let this undeclared war on pork products pass without at least a comment or two.

According to the Koran, pork is strictly forbidden, unless, of course, you have no other choice: "He hath only forbidden you dead meat, and blood, and the flesh of swine, and that on which any other name hath been invoked besides that of Allah. But if one is forced by necessity, without willful disobedience, nor transgressing due limits, then is he guiltless.”

Islam wasn’t the first religion to hate pork. The Torah states:
“And the swine, though he divide the hoof, and be clovenfooted, yet he cheweth not the cud; he [is] unclean to you. Of their flesh shall ye not eat, and their carcass shall ye not touch; they [are] unclean to you.”

In other words, no bacon for you if you are Kosher. Of course, I have plenty of Jewish friends who like some bacon with their eggs, but they probably don’t consider themselves Kosher.

Seventh-Day Adventists also don’t eat pork, so the Christian view of bacon is not in any way uniform.

According to Wikipedia, “The cultural materialistic anthropologist Marvin Harris thinks that the main reason for prohibiting consumption of pork was ecological-economical. Pigs require water and shady woods with seeds, but those conditions are scarce in Israel and the Middle East. They cannot forage grass like ruminants. Instead, they compete with humans for expensive grain. Unlike many other forms of livestock, pigs are omnivorous scavengers, eating virtually anything they come across, including carrion and refuse. This was deemed unclean, hence a Middle Eastern society keeping large stocks of pigs would destroy their ecosystem. Harris points out how, while the Hebrews are also forbidden to eat camels and fish without scales, Arab nomads couldn't afford to starve in the desert whilst having camels around.”

Obviously, none of these folks were hanging around Iowa, where pig farms are king.

Pork is also big at the Illinois State Fair, where you can get yourselves an awesome pork sandwich for a very small price.

Everybody got a good laugh, except for the pig, who didn’t think it was particularly funny as he squealed in Newt Gingrich’s office.

My wife likes to buy turkey bacon for breakfast for my son, who loves bacon, but turkey bacon is a terrible substitute for the real thing (in my humble opinion).

I don’t know what the pork producers are doing these days, but they better get their act together. There is a war on bacon going on out there, and somebody has to stop it.