The SEC Is Good At Football (Or Was); It’s Not So Good At Picking Presidential Nominees 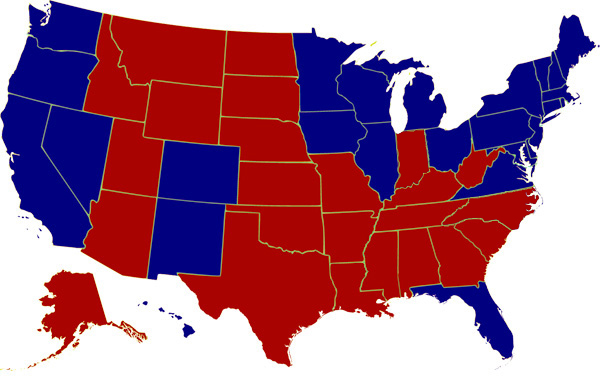 If recent history is any guide, the Republican candidate who competes best in the once-solid South won’t get enough votes in the rest of the country to get the party's nomination.

South Carolina is a special case.  Yes, it is in the South, but in Republican primaries, it does not vote with Alabama or Mississippi.  It's usually the place where the Establishment takes control of the process.  I know people believe that Ted Cruz will win there in a walk, but I betcha a buck that Jeb Bush carries the day.

If a candidate wins the solid South--including Iowa but not counting Texas or Florida--he or she gets 309 delegates. That's nice, but it's not at all close to the more than 1,200 delegates needed to get the nomination.

Neither Florida nor Texas typically follows the course of their fellow Southern states. While certain parts of Florida are as red as Georgia or Alabama, the rest of the state is a hodge-podge of Yankee transplants and Hispanic immigrants.

Texas, which votes on Super Tuesday, usually goes with the winner.  Both Mr. McCain and Mr. Romney won Texas, though that might have had more to do with the calendar than with the candidates. But Texas is a big state, and it requires a lot of resources to compete statewide. It is also a proportional state, meaning that its delegates won't go to one person but will most likely be doled out to candidates who win a certain percentage of the vote.

Those are the states that usually drive the conversation on who will win the Republican nomination.

Right now, most Republican candidates' rhetoric seems to be aimed at the old Confederacy, not at the center that actually decides who will be the Republican nominee.

Republican candidates like to be the most conservative in any primary setting, but that doesn’t get them the nomination--or, at least, it hasn’t in the last two election cycles.

Put another way: The SEC is good at football. It’s not good at picking presidential nominees.