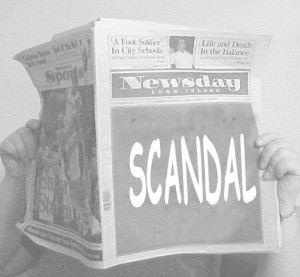 I heard Congressman Steve Israel, the head of the Democratic Congressional Campaign Committee, on television this morning talking about the real scandal.

He is wrong on a couple of levels.

First, Weinergate was a real scandal. It wasn’t a huge scandal, and it wasn’t a kind of government conspiracy. But by Washington standards, it was nice little summer scandal. It involved lying, a cover-up, sex (kindof), a stripper (always good for Washington scandals), the Clintons (so many scandals), a loudmouth, infidelity and embarrassing photographs. Throw in contact with a minor, and you have yourself a real scandal.

But if you want to talk about bigger policy scandals, Republicans cutting spending is not a scandal. The biggest scandal would be if Republicans didn’t cut spending. They promised in the last campaign to do exactly what they are doing this month.

Somebody once said that a Washington gaffe is when somebody accidentally tells the truth. That may be true, but accidentally sticking with your campaign promises is not a scandal.

David Brooks, in his column today, talks about a doozy of a scandal: Fannie Mae. A new book about the housing disaster (which we are all still dealing with), written by two New York Times Reporters, Gretchen Morgenson and Joshua Rosner, details how Washington politicians and influence peddlers, including top Democrats like Barney Frank and Jim Johnson, destroyed our economy with the same kind of speculative fervor and greed that sunk Holland during the Tulip Bubble.

Here’s another real scandal for you: The United States Senate.

Or how about this one: The President attacks the Ryan budget and Medicare plan and yet offers no alternative. Medicare is a very popular program. You would think that the President would want to come up with a plan to save it. But he hasn’t. He prefers to simply attack the Republicans.

I have another scandal for you: The attack on Senator Coburn as a tax raiser. Tom Coburn is a lot of things. He is conservative. He is pig-headed. He is stubborn. But he isn’t a tax raiser. We can have the debate on whether you want to subsidize ethanol or not. But just because the ethanol subsidy is under the jurisdiction of the Ways and Means Committee doesn’t mean that it is a tax break. It’s a give away. Getting rid of it is not a tax increase. Nice try.

There are plenty of scandals in Washington. Weiner-gate was a good one, but not an important one. The media ought to focus on the important ones.