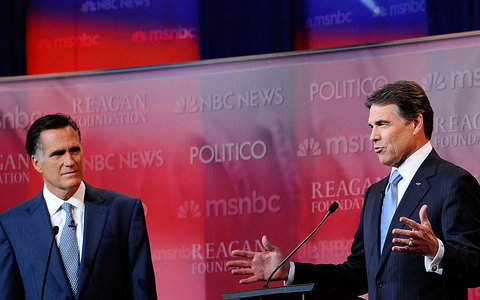 Rick Perry walked into an ambush at the Reagan Library last night, as he took hits on his record, on his rhetoric, and on his philosophy.  John Huntsman revived his campaign with a sparkling performance.  Newt Gingrich took on the role of Spiro Agnew by once again attacking the media for asking questions about the differences between the candidates (which I thought was the purpose of the debate).  Michelle Bachmann joined Herman Cain in the irrelevance caucus.  Rick Santorum scored a good hit against Perry, which eliminated his chance to be named to the ticket by the Big Texan.  Ron Paul went where no Republican has gone before on the libertarian scale.

And Mitt Romney won the debate.

The line of the night was Perry’s Ponzi scheme claim, an utterance that will live in infamy in 30-second commercials from every anti-Perry organization on the planet for the next six months.

The second best line came from Romney:  “I don’t want to eliminate Social Security.  I want to save it.”

It reminds me of the sign seen at one of the big rallies:  “Keep the government’s hands off of my Medicare.”

Romney looked pretty strong.  He didn’t come off as smart as Huntsman, who must be kicking himself right now for hiring Jon Weaver.  Weaver is not a big fan of the modern Republican Party as it currently stands, and he lets his disdain of the party faithfully shine through all too often.  That means he has positioned Huntsman to be the moderate at the Tea Party, a truth-teller, a lecturer, a “leader”.   Well, you can’t be a leader without followers.

Weaver helped fire-up John McCain through many years of the Arizona Senator’s many attacks on the Republican establishment.  That is all well and good, as long as you attack from the right, but attacking from the center makes it awfully hard to eventually lead the flock.

Romney took some effective shots at Perry, defended his Massachusetts record ably, and mostly allowed the moderators and the other candidates to do his dirty work for him.  It was an effective strategy and it delivered Romney the victory.

Romney was the winner, Hunstman a close second.  Everybody else lost.  Perry got kneecapped.  Bachmann started her fade.  The rest didn’t make much of an impact, except for Newt, who showed once again how much he hates the media.