The Problem with the Democrats 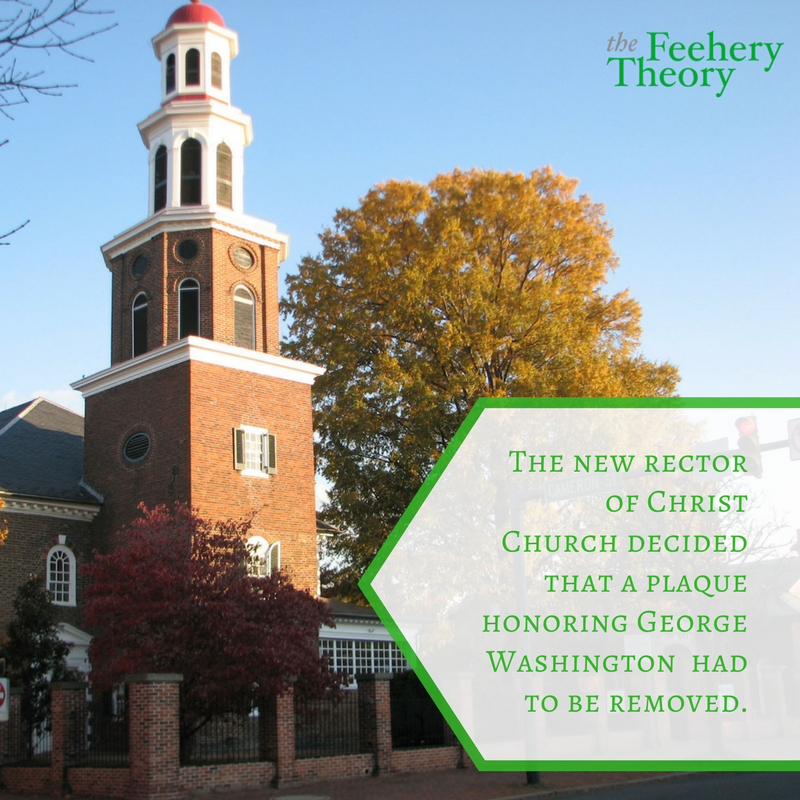 You can find a nugget of the problem in a little Church in Old Town Alexandria.

The new rector of Christ Church decided that a plaque honoring George Washington that flanked the altar was no longer appropriate and had to be removed.

George Washington was a vestryman in the Church and used to travel to Old Town from his plantation at Mount Vernon a couple of times a month to worship there.

For over 230 years, the Church that George Washington called home proudly broadcast that affiliation to all who would listen.

But the new rector, who had been in place for a little over a year, decided that George Washington’s presence (along with Robert E. Lee, who also played a prominent role in the Church and was similarly honored) created an unsafe space for parishioners, who presumably knew about the affiliation when joining Christ Church, and for visitors.

It goes without saying that the new rector, who is a relatively young woman (in her early thirties), is of the liberal persuasion. We can safely assume that she strongly dislikes Donald Trump and that the theology she promotes from the pulpit is the new secular religion of the new left.

And part of that new religion is a desire to not only turn the page on our nation’s history but to tear the page of out of the book and light it on fire with malice and forethought.

The rector would presumably applaud the decision by the Democratic National Committee to actively and aggressively discriminate against white heterosexual men in hiring.

According to a story from Fox News, “DNC’s Data Service Manager Madeleine Leader purportedly wrote in an email that the desire for diversity excludes “cisgender straight white males.” Leader adds, “I personally would prefer that you not forward to cisgender straight white males, as they are already in the majority.”  Cisgender is a term for people whose gender identity matches the sex that they were assigned to at birth.”

Michelle Obama continued the theme when she said:

Are we protecting our men too much so they feel a little entitled and … self-righteous sometimes? But, that’s kind of on us too as women and mothers, as we nurture men and push girls to be perfect," Obama said.  This was a follow-up from her remarks about the Republican Party that is was “all white and all men".

Obama’s disgust with white males is part and parcel of the new religion of the Democratic Party.  Perhaps the most important theme that pulsates throughout the liberal left is the concept of white privilege.  White people, especially white males, are responsible for all the ills that face society and must be forced to pay for their sins.

Concepts long pushed by white men, such as America is a melting pot or if you work hard you can succeed in life, apparently trigger inferiority and massive panic attacks among people of color, or so the new canon of the new left instructs.

This new religion is taught on college campuses as if it were the Gospel according to Luke.

Here is how Conor Friedersdorf of the Atlantic analyzes the efficacy of this new religion:

“As the ranks of college administrators have swelled in higher education, one task they’ve undertaken is more aggressively training students—and at times, faculty members— in what is variously called “cultural competence” or “diversity and inclusion…..But when training faculty members or educating students so that they are “culturally competent,” a process that should involve telling them pertinent facts, is instead used as a pretext to indoctrinate them into a contested ideology, the laudable becomes objectionable….But a flawed approach leaves students less culturally competent than when they began. Consider a widely circulated educational sheet, derived from an academic text, that seems to have originated in the UC system before being circulated at UC Santa Cruz, the University of Minnesota, the University of Wisconsin, the court system of Philadelphia, and beyond. It lists what it calls examples of “racial microaggressions” that “communicate hostile, derogatory, or negative messages to target persons.”

The following statements are included:

“America is a melting pot.”

“America is the land of opportunity.”

“Everyone can succeed in this society if they work hard enough.”

The UCLA professor Eugene Volokh once criticized this microaggressions sheet for going beyond “evenhandedly trying to prevent insult” to actively stigmatizing contested viewpoints, an inappropriate measure for administrators at a public university. I shared that objection at the time, but recently came upon another as powerful.

The Cato/YouGov survey on free speech and tolerance that I reported on last week included questions about whether folks find the same sentiments expressed above offensive.

What the new left has designated to be hate speech, most Americans of all ethnicities deem to be common sense.

America is a melting pot.  American is a land of opportunity.  Anyone in this country can succeed if they get their shit together and work hard.

But increasingly the Democrats see common sense and they recoil from it.

Most Americans want the laws of the land enforced, especially when it comes to our immigration system.  But the Democrats, girded by their new religion, have taken a different approach.

Instead of agreeing to help enforce the laws, they push for sanctuary cities, where local law enforcement pledges not to work with federal authorities to get back people of out of the country.  Because Democrats have bought completely into the philosophy of non-enforcement, they are extremely vulnerable to charges that they are complicit in protecting violent street gangs like MS-13.

You don’t want to be on the wrong side of the MS-13 debate, and yet, that is where the Democrats are.

This manifests itself with the Black Lives Matter movement.  BLM likes to paint with a broad brush about law enforcement.  Cops are always bad and always do the wrong thing.

But what is the likely result if such campaign is parroted by the Democratic leadership, which it has been?  Republicans become the de facto party of law and order while Democrats become the party of chaos and mayhem.  Unfair?  Sure it is, but politics is not a fair business

Think about how the whole NFL episode is playing out for the Democrats.  They now fully support efforts by professional football players to actively disrespect the flag.  How do you think that plays out in an election?

Most Americans actually really love this country and all that it stands for.  Most Americans don’t share the complete contempt and anger towards white, heterosexual men of those who run the DNC and exemplified the comments of the former First Lady.  Most believe that the concept of hard work and self-reliance is good, not bad. Most Americans aren’t completely offended at the idea that America is a melting pot.  And most Americans really like George Washington.