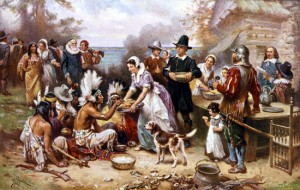 A depiction of the first Thanksgiving

I love that Geico commercial where a drill sergeant stands in as a psychologist and ends up throwing a box of tissues at his patient.

Sometimes I think we need a national drill sergeant to throw a box of tissues at us. We are becoming a nation of whiners and we have to get over it.

I started thinking about that commercial when I read a children’s “Thanksgiving” book to my son Jack.

This book talked about all the stuff that a little kid does on Thanksgiving Day, from breakfasting with friends to playing touch football to eating the big meal. It’s a cute book except it fails to mention two characters in the Thanksgiving narrative.

The first was, of course, God. Now, I am not one to wear my religion on my sleeve, but the whole point of Thanksgiving is to, well, thank God for all of the blessings that have come our way.

The other character is the Pilgrims, who first settled in America, amid privation, starvation, and host of other challenges. They were the ones who had the first Thanksgiving meal, and they had a lot to celebrate. It ain’t easy crossing the Ocean blue in a small boat, with limited supplies, and land in a forbidding wilderness, face hostile Indians, and inclement weather (there wasn’t global warming back then). There were no hotels to check into, no cable television to turn on, no Domino’s Pizza to order on the telephone, and in fact no telephones. They couldn’t make a run for a Taco Bell or for a Happy Meal.

The Pilgrims were tough. They weren’t begging for any handouts. They weren’t threatening to protest if their Social Security colas were frozen. They didn’t plan to retire at age 50, with full benefits and then complain to their union when those plans are not realized.

The Pilgrims prayed for good weather because bad weather was deadly. They didn’t run to Nordstrom’s or Macy’s to buy their clothes. They made their clothes, and because it took so much time and effort to make their clothes, they didn’t have many. That is probably why closet space wasn’t that big of an issue back then. If they had a king size bed, the whole family slept on it. But more likely, the parents slept on one small bed while the kids slept on another, but even for the first Pilgrims, beds were a big luxury.

The Pilgrims relied on faith, because faith was all they had. They relied on hard work, because if they didn’t work hard, they would die. They didn’t rely on the government, because, well, they were trying to escape a government that didn’t particularly like the way they prayed.

They came to America because they wanted to build a better life for themselves. They didn’t expect things to be easy, and they weren’t. But they knew that if they worked like the only way the sun would come up was if they worked their tails off, then they and their families would live another day.

Thanksgiving is truly a holiday of celebration. It is a holiday held in November to celebrate the harvest and to pray for mercy during a usually tough winter season. It is a holiday to not only give thanks to our Creator but also to give the proper respect to the value of hard work and perseverance.

We are going through some tough times in America these days, but if we are to survive these tough times, we need to stop whining and start working.

The Pilgrims’ story may not be politically correct these days, but screw political correctness. Nobody ever gave the Pilgrims anything. They worked hard and built America with their faith and great courage. Their message is just as relevant today as it has ever been.