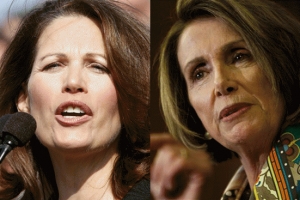 Nancy Pelosi, the House minority leader, must be very happy with her colleague Michele Bachmann.

Bachmann (R-Minn.) has stated repeatedly that she will never vote to increase the debt limit. And her position is winning converts among some House Republicans, especially those who are worried about a primary challenge from the right.

The Bachmann effort brings a smile to Pelosi’s (D-Calif.) face because Pelosi knows how to count votes as well as anybody. She knows Bachmann’s public pronouncements counter intuitively give Nancy Pelosi greater leverage in the negotiations on the debt limit.

Speaker John Boehner (R-Ohio) would rather negotiate with Minority Whip Steny Hoyer (D-Md.). Hoyer, who trends more moderate, is a reasonable fellow who has demonstrated an ability to cut a deal. Hoyer, unfortunately, can only bring with him about 30 Democrats. That is enough for Boehner, if he can keep his caucus unified enough to get 190 votes.

But if the Bachmann Tea Party Caucus grows beyond 40, that makes Boehner’s task more complicated. And it gives Pelosi a lot more power in the negotiations.

Some of the Tea Partiers honestly believe that we don’t have to raise the debt limit, that we can re-prioritize our debt payments, make minimum payments on some bills that are coming due while floating other payments.

John Boehner is not willing to have the economy completely collapse, the stock market tank, our credit ratings crash and businesses shutter to prove the Tea Party’s point that we can re-prioritize our debt. So he is going to cut a deal to extend the debt limit.

There is a good reason that President Obama and Senate Majority Leader Harry Reid (D-Nev.) kept Pelosi out of the room during the last negotiation. They understand that Pelosi’s ideological and political motivations are different from their motivations. Pelosi is far more liberal than either Reid or Obama. And most importantly, Pelosi doesn’t want to preserve the political status quo. She wants disruption, because only with disruption can she take back the House. Unlike Reid, who still has the majority, and Obama, who is the incumbent president, Pelosi needs victory on her terms if she is to have a shot at retaking the House.

Like Pelosi, Bachmann is motivated by both ideology and by politics. Ideologically, she simply doesn’t believe in the idea of extending the debt limit, despite the fact that Congress has extended it countless times over the history of the republic. But her position also works politically, because it helps distinguish her from her colleagues, from the president and from the status quo. By taking such a purist position, Bachmann also appeals to her Tea Party political base, especially in Iowa.

Time is closing in on the president, the Speaker and all of the congressional leaders. One thing that both sides agree on is that the United States will not default on it debt. If that is the case, then at some point in time, John Boehner is going to have to bring a deal to the House. Will House Republicans give him enough votes so he can deal with Steny Hoyer, or will Bachmann force him to deal with Nancy Pelosi?