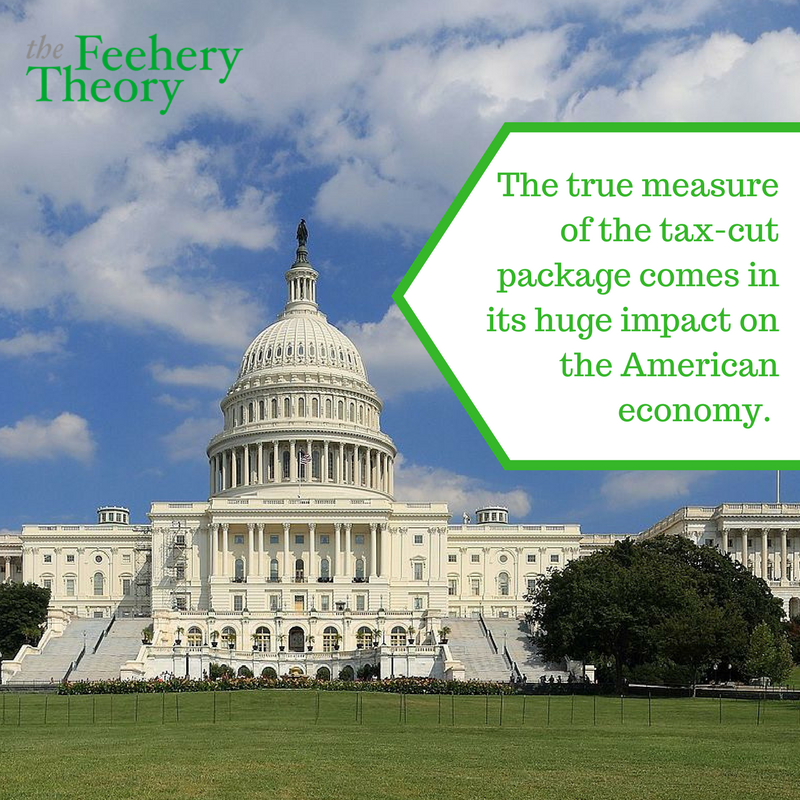 Republicans are trying to sell their tax-cut package at a very acute angle. They are crunching the numbers and telling their consumers how much they will be getting back from the federal government.

But this doesn’t give the true measure of the measure.

For tax reform to be successful, it must unleash the animal spirits.  It’s not enough to promise the middle class that they might see an additional thousand dollars or so in their pocket (although every bit helps).

After President Kennedy’s untimely demise, the Congress passed the Revenue Act of 1964, which reduced the corporate tax rate from 52 percent to 48 percent and the top rate for income exceeding $100,000 from 91 percent to 70 percent.

Of course, nobody truly paid those rates back then, unless you weren’t particularly clever at tax avoidance.  But the resulting reform, coupled with the Great Society Program, led to years of economic growth that only slowed down after it was discovered, in the later years of the Vietnam War, that you can’t truly have your guns and your butter too.

In 1980, candidate Ronald Reagan embraced Jack Kemp and Art Laffer and their revolutionary idea of supply-side economics. In 1981, Congress acted on the theory and slashed tax rates on the wealthiest Americans from 70 percent to 50 percent and slashed taxation of investment and business by 150 billion dollars.  Democrats decried trickle-down economics, but coupled with a big increase in defense spending, the tax cuts led to the largest and longest economic expansion in modern history. That economic expansion made Reagan a shoo-in for reelection.

In 1997, after forcing President Clinton to sign into law legislation to reform our broken welfare system, the Republicans successfully cajoled him and his Democratic allies to pass legislation that dramatically reduced the tax put on capital gains while increasing the child tax credit. The capital gain cut was particularly well-timed for an economy that was ready to explode in growth thanks to the tech boom.

What these three tax measures all shared was a dramatic reduction in the taxes on the business sector, coupled with some help for working families. And the result from each of these measures was remarkable growth in the economy.

In 2001 and 2003, President Bush signed tax-cut legislation that was much more modest in design and in impact.  Sure, voters got a nice little check in the mail for the effort, but that was about it.

That is not the case this time around.

Like the reform efforts of 1964, 1980 and 1997, both the House and Senate offer radical reform on both the business and the individual side of the tax equation.

By slashing the corporate rate to 20 percent, tax writers (and the Trump administration) are taking a bold step to stop the troubling migration of multinational corporations to other, lower-tax jurisdictions. This is an important step in the evolution of the United States tax system, but only if it is done without creating an unfair playing field, tilted against pass-throughs and partnerships that make up a huge percentage of actual businesses in the country.

By doubling the personal exemption, tax writers similarly give a huge boost to middle-class taxpayers, those who can use the money because their wages have stagnated for the last decade or so.  I am a big fan of the Sen. Marco Rubio (R-Fla.) approach to giving more deference to families with children, and I would hope that the committees find a way to expand the child tax credit.

In selling these tax cuts, Republican communicators should make no little plans.  Don’t play small ball.  If history is any judge, the way this tax cut package is designed should prove to be a huge boost to economic growth and to the paychecks of all Americans, not just to those who consider themselves to be in the middle class.

The true measure of the measure comes not in the small refunds of the average voter, but in its huge impact on the American economy.

Also on The Hill.