Tax Reform: The Power To Not Tax Involves the Power to Not Destroy 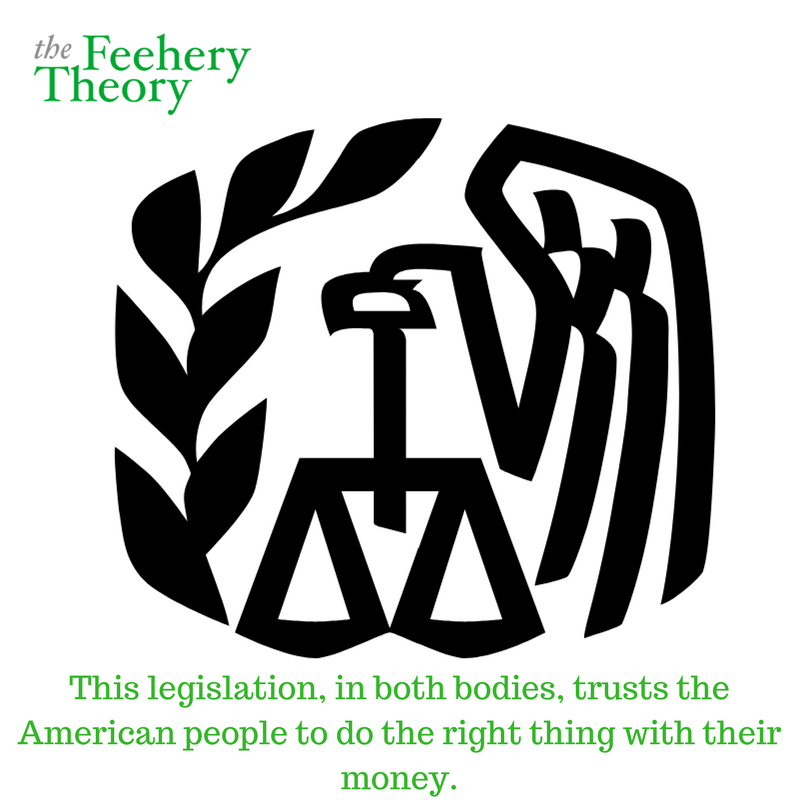 So said John Marshall in his landmark decision McCullough vs. Maryland.

The state of Maryland attempted to put the Second Bank of the United States out of business by putting a specific tax on only that bank while allowing other banks to operate without paying the tax.

Since the Second Bank of the United States was chartered by the Federal government and since it was clear that the State of Maryland didn’t give a rat’s ass about the power of the Federal government and was expressing its opinion of its relative power, it was necessary for Mr. Marshall, who was Thomas Jefferson’s cousin and one of his most bitter rivals, to clear up any uncertainty.

A State can’t tell the Federal government to go screw itself.

Although, as we see in the recent election down in Alabama, that sentiment still runs deep.

That is the message that Democrats are trying to foist on the American people in the context of the tax cut bills that are making their way through the legislative process in both the House and the Senate.

Republicans are attempting to give the American people a healthy dose of freedom, from which they can choose to do all kinds of things.

For example, they are relieving millions of Americans the burden of paying for Obamacare through a tax called the individual mandate.  The individual mandate is aimed at millennials who don’t have the money or the inclination to buy health insurance on the exchanges created by President Obama.

This tax has proven to be a painful stick in the ribs to kids who barely have enough money to find an apartment, let alone get married or buy a house.   It is basically the federal government telling these kids, your money or your wife.

It is an unpopular tax, viewed dimly by a whopping 63% of the American people, most of whom don’t have to pay it.

The Democrats are making the case that without this punitive tax, Obamacare will probably fail. I have news for you.  Obamacare was failing anyway and repealing this tax might be the most popular part of the tax reform bill that the Senate is now considering.

But giving the American people more freedom by repealing the individual mandate is not the only example of how the power to not tax is making Democrats awfully nervous.

Republicans are doubling the personal exemption and increasing the child tax credit, a combination which will mean that almost 90% of the American people will be able to file their taxes on a postcard.

That, of course, has a bunch of people very nervous, especially realtors and charities.

Realtors want to make sure that more taxpayers are able to deduct the interest they accrue on their mortgage payments and doubling the personal exemption takes that incentive off the table.  The home mortgage deduction was an incentive put in place to compel more home ownership.  But if the American people make their own choices, perhaps some of them will decide to do something else with their money.

I am all for home ownership and I think that for folks who itemize, the mortgage interest deduction is smart public policy.

But shouldn’t taxpayers have more power to make that decision themselves, especially those on the lower end of the income stream?

Same thing with charitable contributions.  I don’t give to charities for the tax write-off, although I know I might be in the minority on that front.  The irony, in my mind, is that the folks who give the most to charities (the richest Americans) give to charities precisely because they are write-offs and many of those charities are of questionable benefit to society (I don’t think Freedom Works is much of a charity, in my mind).

McCullough vs. Maryland was a decision involving the relative power of the states, vis a vis, the Federal government.

The Senate Finance’s tax bill is an attempt to rebalance that relationship to the benefit of the taxpayers in every state.

The deduction for State and local taxation was initially meant as a way to protect states from getting squeezed out of the ability to tax anything at all.  In the aftermath of the First World War and in the period following the Second World War, tax rates on top earners approached up the 92%.

The State and local tax deductions were put into place to make sure that taxpayers weren’t being charged taxes that exceeded one hundred percent of their income!

It’s a good deal for the States, who tend to have to balance their budget because of their state constitutions, but terrible for the federal deficit and the federal government that gets stuck with the bill and never bothers to balance its budget.

Because the Senate doesn’t have many (if any) Republican Senators who come from so-called blue states, they can end the state and local deduction as part of their plan that will come to the floor next week.   The House has enough members who come from blue states that they will be forced to negotiate on the issue, in order to get enough votes on the issue.

I live in the District of Columbia and I get a nice write-off with the State and local deduction.  But I would gladly give it up in pursuance of the principle that says that states, localities, and districts don’t get a free ride to raise my taxes, just because they can, thanks to the generosity and stupidity of the Federal government.

I applaud the work products produced by the Ways and Means Committee and the Senate Finance Committee.  They are working hard to give the American people more freedom, not only by reducing their taxes but also by making the tax code more neutral on basic incentives.

This legislation, in both bodies, trusts the American people to do the right thing with their money.  That’s probably why the Democrats are going so nuts over it.