The Libertarians Are Coming 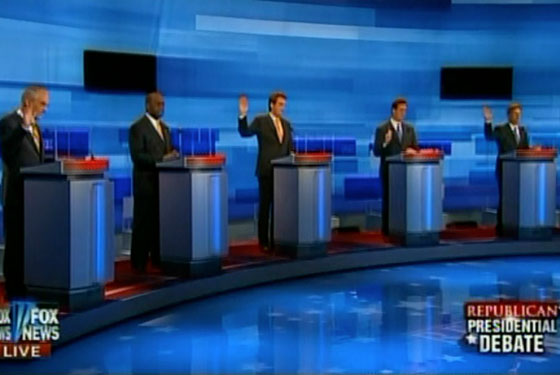 Ron Paul got some help last night from Gary Johnson in the first Republican Presidential primary debate in South Carolina, and the result was a completely different-looking GOP.

Paul and Johnson may not be serious contenders for the White House, but they had the only really serious message: Get the government out of our bedroom, out of our kitchen, out of our business and out of our lives.

Paul even had the temerity to question why we are giving so much of our hard-earned tax money to Israel, and even more of it to Israel’s enemies. Let them take care of themselves, he said. We should stay out of it.

For a Republican party that dislikes government intrusion in the marketplace, but usually likes a little government to compel some moral behavior out of the people, this was a dramatic break.

Paul and Johnson took turns talking about freedom in its starkest form. If people want to shoot up heroin, what should we care? If gay people want to get married, hey, more power to them. Let’s keep the government out of it.

According to Frank Luntz’s instant poll after the debate, the winner was Godfather’s pizza owner Herman Cain. Cain wasn’t going to rain on the libertarian’s parade. His major point was one that resonates with a lot of Republican primary voters: These politicians screwed this whole thing up, and because I am not a politician, only I can fix it.

Poor Tim Pawlenty looked like a fish out of water. He actually thinks he might be President some day. The rest of these guys all know they have no chance, but appreciate the fact that Fox is giving them so much national exposure that their speaking fees will go up. Pawlenty, though, because he actually might be a serious contender, was notably more cautious and as a result, more boring. He looked like the substitute teacher who just walked into a particularly troublesome class of fourth graders.

Rick Santorum, the former Senator, went old-school on the field. He believes that the only way America can be saved is if gay people go away and women stay at home. That worked pretty well in the 15th century, and it works for a portion of the Republican primary field. But sandwiched between the libertarians Paul and Johnson, Santorum’s lectures seemed narrow, petty, and desperately out of date.

It seems that personal freedom is more popular than religious orthodoxy, even in a conservative GOP.

The challenge that the libertarians are presenting to Republican orthodoxy is subversive. They want a dysfunctional government to get out of our personal lives and out of our business affairs. This isn’t George Bush’s compassionate conservatism nor is it Ronald Reagan’s three-legged stool. This is freedom, baby, with all its warts.