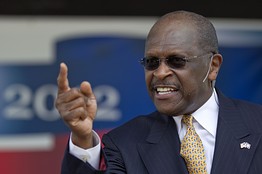 The Hermanator is now tied with Rick Perry for second place in a new Washington Post poll in the Republican race for the White House.

That doesn’t surprise me much. A very good friend of mine who describes himself as a moderate independent Republican kind of guy pinged me on Facebook about Cain. He said he would vote for him if Mr. Cain survives the primary process down in Texas.

And for many folks out there, Herman Cain is more than just a successful pizza guy. He is the embodiment of the American dream.

Unlike Barack Obama, Cain believes deeply in the concept of American exceptionalism. He worked hard his whole life, and he has been successful at just about everything he has done.

Where Obama preaches collectivism and class envy, Cain preaches self-reliance and individual liberty. Where Obama has nothing but contempt for free-market capitalism, Cain believes strongly in the power of the marketplace.

He turned around Burger King, made Godfather’s Pizza a huge success, and helped to stop Hillarycare in the mid-nineties.

Cain, born in Georgia in 1945, encountered his fair share of racism growing up in the old South. He is no naïf about bigotry. But he learned the value of hard work from his parents (his mother was a domestic and his father was a chauffeur). A graduate of Morehouse College, one of the great historically black colleges, Cain served in the Navy before starting his business career at Coca-Cola.

In many ways, a Cain-Obama match-up would be intriguing. One believes in the American dream, while the other believes that America must be fundamentally changed. One confronted racism in the heart of the Confederacy during the most difficult days of civil rights battles, while the other became a community organizer in Chicago twenty years later. One was born of two black parents whose grandparents were likely slaves, while the others parents were a white Kansan and an African who had no experience with American slavery whatsoever. One has been accused of selling out his people by being a Republican, while the other was accused of not being black enough in his first political primary.

I like Herman Cain. He is hard not to like. He has stared down cancer, corporate America, racists, and the American media, and he seems to be getting stronger as the campaign goes along.

But that doesn’t mean that I would vote for him for President.

But the Hermanator is not ready to be President of the United States.

He doesn’t have the diplomatic or political skills to run the country. He has never won an election. He doesn’t have a sophisticated strategic world-view. He hates Muslims too much. He is prone to saying crazy things about sharia law. He doesn’t have a basic understanding of key international issues, like the Palestinian right of return or the strategic ambiguity of our relationship with Taiwan.

His 9-9-9 plan sound like a good idea, but it really isn’t. It is actually a back-way to impose a 9 percent sales tax on all products while keeping around an individual and corporate income tax. You start with 9-9-9, and pretty soon, you are at 20-20-20 and you wonder why everything is so damn expensive.

If he were elected President, it would horrify our allies and bring a smile to the face of our chief competitors. We would be an international laughing-stock.

I like Herman Cain. But he shouldn’t be our next President.