The Class of the 112th Congress 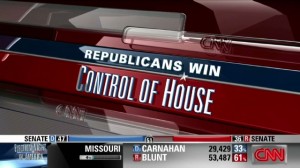 Over the last four decades, there have been four huge classes on incoming Freshmen members of the House that are historically notable.

The Class of 1974 swooped in as Watergate caved in around Richard Nixon and with it came a liberal sensibility that smashed the seniority system, opened up the political process, changed the campaign finance laws, reformed the budget process, and put the Intelligence Community on notice that the Congress no longer had its back.

Twenty years later, the Class of 1994 came in with a conservative sensibility in reaction to the first two years of Bill Clinton, and that group similarly smashed the seniority system, audited the House’s books for the first time in history, professionalized the management of the institution, balanced the budget for the first time in three decades, passed welfare reform and ushered a long period of Republican dominance.

Twelve years after that, Nancy Pelosi and Rahm Emanual took back the House. Emanual built the majority tactically, piece by piece, by finding dozens of conservatives to moderate Blue Dog Democrats, who would vote for Pelosi for Speaker, but talk like a Republican back home. Pelosi promised to drain the swamp of corruption, and then embarked on a “progressive” wish list, which most notably included an increase in the minimum wage. While Emanual was trying to rebuild the old Democratic coalition of liberals, moderate and conservatives, Pelosi governed the House as a liberal, and when President Obama was elected, she pushed through her agenda that promised more government control over the energy and health care marketplaces.

The difference between the Class of 1974 and the Class of 2006 for Pelosi was that in 1974, the country was much more liberal than it is today. Richard Nixon governed as a liberal on domestic policy, imposing price controls at one point, creating new government agencies and generally ignoring other conservative issues. Pelosi, whose sensibility dates back from the Class of 1974 (her closest confidant is George Miller, a liberal Congressman from California and one of the most aggressive members from that class), thought that she could walk the walk of 1974, while her more moderate colleagues could talk the talk of 1994.

But that was a misjudgment. Both Mrs. Pelosi and Mr. Obama misread where the people were on the issue of change. As Denny Hastert likes to say, the people wanted change they could believe in. They didn’t want to change what they believed in.

And what they believe is that government is too big and spends too much. They believe that Washington is broken and fixing it doesn’t mean making it more powerful. And they also believe that it takes more than lofty rhetoric to fix the problems that face the economy.

So, the people decided to send Washington a message in this last election. They took the advice of Republicans, and fired Nancy Pelosi as their Speaker of the House. They sent a new class of mostly Republicans to fix the mess in Washington.

While much has been said about the stridency of some of these members, the fact is that an overwhelming majority of them have a great deal of political experience. Fifty-six of the 82 new Republican class have previous political experience, including 5 former members who decided to come back. They are geographically diverse with about half of them coming from states that are north of the Mason-Dixon Line. About a third of them are Roman Catholic, making the mostly Protestant caucus more religiously diverse. Slightly more than half of the class was born in the 1960s and 1970’s, which means that while there are some young members, there are also plenty of members who have plenty of experience under their belt.

About 52 of the new Republican freshman are really going to have to worry about redistricting back home. Their states are either losing seats or gaining them. The ones that have political experience are going to have a leg up on those who don’t. Republicans will have the pen in redrawing 195 seats, while Democrats will have the power in only 45 seats, but that doesn’t mean the new Freshman are out of the woods. Republicans also picked up 680 state legislative seats, twice the number that Democrats picked up two years ago. That means that a lot of ambitious people are going to want a chance to move up.

Getting rid of earmarks, which seem to be the way the Republicans are trending, means that many of these new arrivals aren’t going to have any bacon to bring home to make their job at redistricting any easier. Luckily for Republicans, they have the pen in Michigan, Pennsylvania, and Ohio, places where seats are going to disappear. Unluckily, they don’t have the pen in New York, Illinois and California, and that will cause problems for the new arrivals from those states.

Republicans are already being whipsawed by the various Tea Party groups which are claiming credit for the Republican triumph. Conservative groups like the Heritage Foundation are trying to make certain that only the most conservative staffers get hired. It is highly likely that many of these new members will bring in their campaign staffs, but that is probably not the best idea. The most important staff person in any office tends to be the rock-star caseworker back home, who understands how to handle the Washington bureaucracy and who knows how to handle constituents with a smile and with some empathy. Hopefully, many of these newcomers understand the value of an effective office back in the district.

Most members of the new class are energized by the mandate sent to them by the voters. Understanding that mandate, though, is essential to being able to achieve it.

I am pretty confident that many of these new members will get it. They will understand that they are being sent here to do a professional job, to represent their constituents and to bring change to Washington. They may be willing to take tough votes, but I don’t think that many of them are interested in taking politically suicidal votes.

The House Republican leadership doesn’t want this class to be a bunch of one-hit wonders. They want them to stay around a while. Some outside activists are already telling these new members to ignore their leaders and go their own. I don’t think that this is sound advice. House Republican leaders have a vested interest in this success of this new class. The more they all work together, the more they will get done in the long-term.