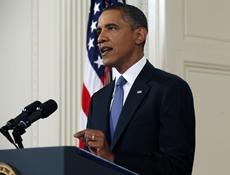 President Obama took 13 minutes to say something he could have said in 30 seconds. He is taking 10,000 troops out of Afghanistan immediately and plans to take out 30,000 or so more by the end of the year.

The rest of the speech was pure puffery, told with some dramatic flair, and with a left hand that kept stabbing the air for emphasis.

He left both sides unsatisfied. The left is clamoring for an immediate withdrawal, joined by more and more libertarians on the right. Neo-conservatives saw the President’s decision as dangerous sign of creeping isolationism. Most members are stuck in the middle with the President, hearing from their constituents that this war should be coming to a quick close but also being briefed by the Pentagon, which warns that too precipitous a withdrawal could have negative ramifications for our national security.

I am not an isolationist, but that doesn’t mean that I think we should stay in Afghanistan. I think you can make a case that leaving the Afghans to their own devices could be dangerous, but I mostly think that because of the heroin problem, not because of the Taliban.

Roy Blunt made the most sense, when he warned, in a statement, that if we don’t take proper precautions, we could leave the troops who are left behind in a tough spot. After all, the Obama surge was really an example of calling in some reinforcements, kind of like calling in John Wayne and the U.S. Cavalry in the movie “She Wore a Yellow Ribbon.”

I am not a big fan of endless military incursions. They cost lots and lots of money, cause the loss of lots and lots of lives, and they tend to take on a life of their own after a while, usually causing more trouble than they are worth.

More and more Americans are saying that this doesn’t make any sense.

The President didn’t really address that question last night. He gave the usual platitudes about how we are winning, about how much he loves the troops, about how this is critical to our national security mission, about how stupid the Iraq War was, about how we should have kept our eye on the ball, blah, blah, blah. He fit in Joe Manchin’s line about how we need to start investing back home (most have poll-tested well), and then finished with a stirring line about God blessing our troops and America and all of that stuff.

I am sure my good friend Adam Belmar has some very smart things to say about the backdrop and the setting behind the President’s speech. He is a lot smarter about those things than I am. But in my view, I think the setting was needlessly dramatic for a decision that was actually pretty modest. The President didn’t change the world with his decision to take 10,000 American troops out of Afghanistan, unless of course, you are related to one of the lucky 10,000.

But hopefully, this is but the start of a process that gets our troops out of there and gets the American taxpayer off the hook for the billion dollar a day tab that this incursion has cost us for the last several years.