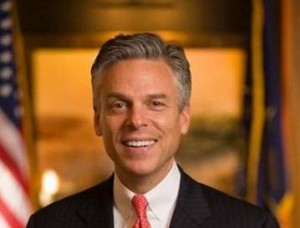 Candidly, I don’t know what to make of the Jon Huntsman announcement yesterday.

It wasn’t the smoothest of starts. Apparently, his announcement press release misspelled his first name (he doesn’t use an H in Jon, an omission that I have always found profoundly troubling).

He made his announcement in New Jersey, of all places. Why New Jersey? I don’t know.

His campaign team tried to make a run at winning some straw poll in New Orleans, which apparently is why he didn’t participate in the first debate in New Hampshire.

It is safe to guess that he won’t be playing in Iowa, perhaps because it doesn’t have the word “new” in it. He promises to run a new campaign, one that doesn’t resort to negative tactics.

I hate to be the skunk at the garden party, but campaigns that refuse to stoop to negative tactics tend to share one common trait: they lose.

Huntsman, refreshingly, didn’t spend the majority of his campaign speech showing primary voters how much he hates Barack Obama. Of course, that would be pretty hard for him to do, since he worked for the man less than 6 months ago.

A question can and should be raised about what exactly Mr. Huntsman was doing over there in China. A Bloomberg news report reported that the Huntsman Corporation did very well in China while Mr. Huntsman was the Ambassador, apparently expanding its operations and hiring more and more Chinese. That probably doesn’t sit well with the average voter who is wondering while all the jobs are moving to China.

In Huntsman’s defense, at least he knows the answer to the question: what happened to my job?

It remains to be seen if that becomes a campaign issue, but my guess is that if Michele Bachmann in any way sees Mr. Huntsman to be a threat, her cagey campaign guru Ed Rollins will not adhere to the Huntsman doctrine on negative campaigning.

The Ambassador is counter-intuitively going after the sophisticated Rockefeller Republican vote, a voting segment that tends to have a lot of money but not a lot of actual voting strength in the current GOP. Many of those Rockefeller Republicans now refer to themselves by another moniker: Independent. They probably voted for Mr. Obama in the last election, but they can’t stomach his all-out assault on the free market, and yet they are completely repulsed by the Sarah Palin/Bachmann/Santorum wing of the Republican party.

They probably find Mitt Romney less objectionable, but the whole holy underwear thing probably gives them some pause. Huntsman seems to be less of a Mormon, and more of one of them, which is the exactly the sentiment that the newest entrant into the GOP field seems to be aiming for.

Huntsman’s ties to China make him very appealing to the Big Business sector, which still sees the Sino-American relationship as key to their own personal economic growth. That might help the former governor raise some money, but I still don’t know how that translates into votes in the GOP primary.

My guess is that if Huntsman is really serious about this whole Presidential thing, he will somehow team with the Mayor of New York and form a third party, a la John Anderson. I still think our political process is ripe for an insurgent third party challenge, but I just know who will lead it.

Right now, I just don’t see the math for him the GOP primary. Huntsman is serving arugula to a bunch of partisans who thrive only on red meat. Romney has already tied up those Republicans who fancy themselves to be rational, and I don’t think the Ambassador can change his tune enough to become the anti-Romney candidate.

I could be wrong, but right now, I just don’t see it.