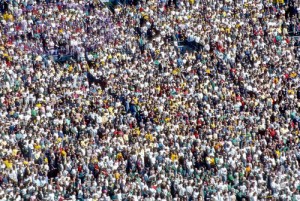 According to the United Nations, the 7 billionth person came into the world the other day.

I was wondering why it felt kind of crowded around here.

Most of the growth is occurring in Asia, Africa and South America. The United States and Europe are expected to stay fairly flat in their population growth, but that doesn’t mean that Europeans and Americans won’t be profoundly affected by the population explosion in other parts of the globe.

The CIA and the Defense Department planners are already thinking through the implications of this population boom. Politicians need to follow suit.

Food security is an obvious concern. According to the United Nations’ Food and Agriculture Organization, food production will need to increase 70 percent in the next two generations. That’s a lot to ask of an industry that is being hampered by all kinds of government regulations.

Water security is a perennial flashpoint, and has been throughout American history. We like to build retirement communities in deserts, but the nice weather only really is nice if you have access to air conditioning and easy access to water. Yes, conservation is important, but it won’t solve the problem by itself.

Transportation infrastructure is the key to long-term competitiveness in an increasingly crowded world. This is no time for small ball, either. We have to think and then rethink why and when people commute to work, if the work can be better done at home or in a mobile office.

As the planet gets more crowded, its inhabitants also get older. Population-control policies (like China’s one-child policy) make retirement systems (like Social Security) harder to sustain in the long term. It is fine to live a long time, but having a billion people live until they are 100 will put an incredible strain on the world’s economic system.

As the rest of the world grows, economies will demand more resources and consume more commodities. We have already seen how China’s rise has affected the price of rare earth metals, for example. How will American policymakers and business leaders confront that reality?

This population explosion will also strain our borders as more people from the less developed world will seek to come to America. Who do we let in? Who do we keep out? And how will that affect America’s standing in the world?

Perhaps the best way to deal with the long-term population explosion is to rapidly and aggressively search for livable planets in other parts of the galaxy, and then pour resources into encouraging exploration and settlement. But because we already spend so much money on our retirement programs, we can’t afford to fund a first-class space program anymore. So how do we encourage the private sector to take the lead on this exploration?

I am an optimist about the future, and I believe that we will find a way to manage our population problem. But we need our political class to start taking a serious look at all of the ramifications of all of these people, and start having an adult conservation about how we are going to manage the future.