The 6 Other Deadly Sins 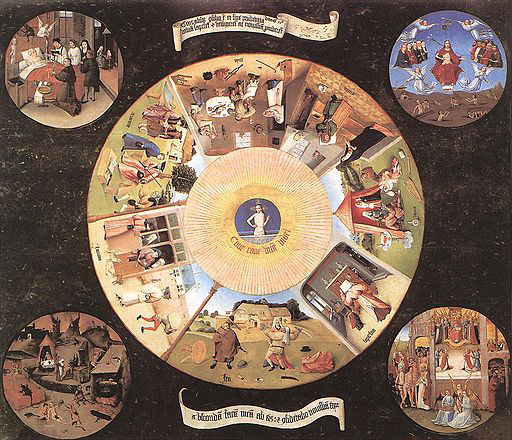 Several years ago, I wrote piece for Politico, imploring the Republican Party to start the process of focusing on sins other than lust, although there is still ample concern about our society on that front.

The article is a bit outdated now, but as the Capital prepares for the arrival of Pope Francis, there are still some good reminders there. So, I thought I would rerun the column, with some additions here and there.

In the wake of the scandals surrounding South Carolina Gov. Mark Sanford and Nevada Sen. John Ensign, lust has been pretty much played out as a campaign theme for the GOP and the conservative movement. Not that the Republicans haven’t had some success on the subject of family values over the years.

In fact, I would make the observation that the country has shifted rightward over the past 20 years on some key issues surrounding sex and sexuality.

For the first time in a generation, more people are anti-abortion than support abortion rights. Divorce rates have tumbled dramatically. And on the issue of gay marriage, I can make the case that the fact that homosexuals want to get married is a victory for family values over promiscuity.

But when it comes to lust as a political issue, Republican politicians are like the rest of America in controlling their carnal desires: Some are better at it than others.

There is no better time for the conservative movement to change its almost singular focus on lust and start focusing on the other six deadly sins. If it can make similar progress on these other fronts, we would be on the pathway to a better America.

Gluttony: That we have a national problem with gluttony should come as no surprise to anybody. Obesity has reached epidemic proportions. Diabetes is out of control among younger Americans. We simply eat too much, and it is killing us. We need to change our attitude toward food. We need to get in better health. We need to stop being gluttons. Mike Huckabee is alone among Republican politicians in making this a big campaign issue (or at least, he used to).

Greed: While a little bit of greed helps the economy grow, too much greed can kill the framework of a society. It is not all about the Benjamins. Think Bernie Madoff. Conservatives usually recoil at any government efforts to control greed, because they immediately fear tax increases. But conservatives can and should speak out against unbridled greed, which undermines the moral foundation of capitalism and, all too often, emphasizes short-term gain over long-term happiness.

Sloth: In general, sloth means a disinclination toward labor or exertion. Idle hands are the devil’s workshop. We, as a nation, cannot afford to have a work force that doesn’t want to work, students who don’t want to study or a class of idle retirees who are simply waiting for their next check from the government.

Wrath: According to Wikipedia, wrath — also known as anger or “rage” — may be described as inordinate and uncontrolled feelings of hatred and anger. To Republicans who spend too much time listening to talk radio: Wrath is no way to make public policy. Controlling the right’s political rhetoric is the key to winning the independent vote, and it’s the best way to regain control of Congress.

Envy: One who commits the sin of envy resents that another person has something he perceives himself as lacking, and he wishes the other person to be deprived of it. Sounds like class warfare to me. Nobody practices the politics of envy better than the Democrats. But this deadly sin goes against the very foundation of the American dream, which is built on the best aspirations of a hardworking people, not on the class warfare designs of the envious.

Pride: Pride is identified as a desire to be more important or attractive than others, failing to acknowledge the good work of others and excessive love of self. Isn’t this the very core of the problem of the political class, that they hold themselves up as being more important than the people who pay their salaries, the taxpayers? Dante, in his “Divine Comedy,” had the prideful walk around with stone slabs on their backs to induce more humility. No need to have Republicans walk around with slabs on their backs, though. Losing the White House again would be humbling enough.

Donald Trump, are you listening?

I would make one more observation, in the context of Pope Francis. Francis often talks about the evils of money and materialism. I don’t want to put words in the Pontiff’s mouth, but I assume that he sees a place for the free market in the creation of wealth and the improvement of mankind.

But  you can’t see the state of the world today and not be concerned about the sin of worshiping false Gods. And worshiping at the altar of the free market is a sin.

Some believe that the market is infallible, that it is perfect and needs no corrections or constraints. But as practiced by man, we know that is not true. You can make the case, I suppose, that the financial crisis was caused by crony capitalism, but I think you stretch the bounds of credulity when you make the claim that the vast inequality found in the world is caused by politicians. I don’t believe that to be the case.

I believe that sometimes the markets and the marketplace need correcting and that representative democracies are the best and fairest instruments to make those corrections.

Pope Francis is not primarily a politician, although he does have some obvious political skills. He is a moral and spiritual leader whose job it is to remind to us to not worship false Gods, to be mindful of our sins and to be more ethical and better citizens of the world.

I might be not like everything that he is going to say to Congress next week, but I am glad (and thankful) that he has the opportunity to say it.