Tax Reform in the Age of Cynicism 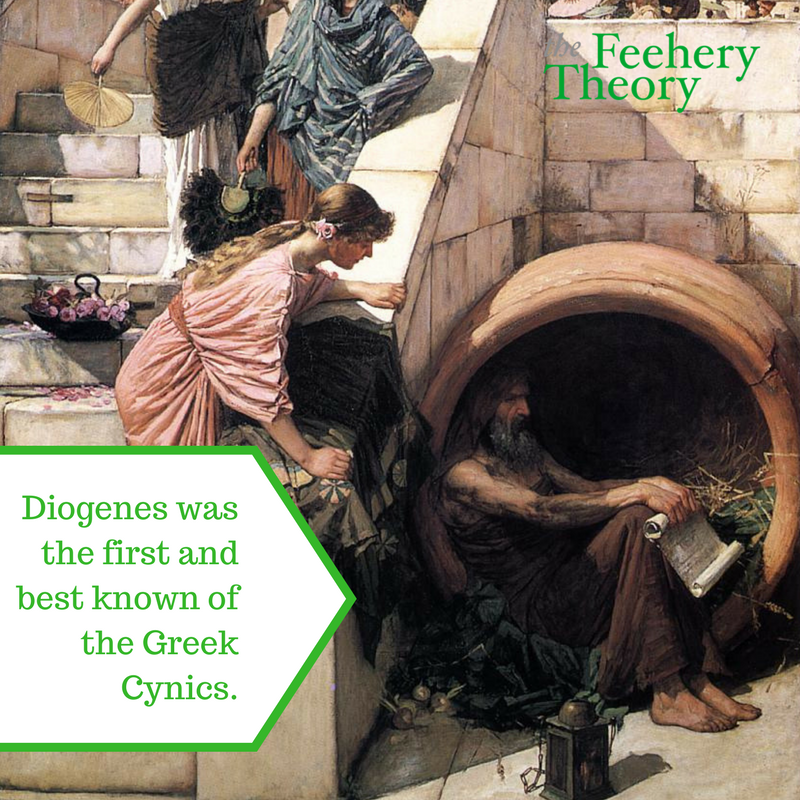 Diogenes was the first and best known of the Greek Cynics.

You would think that legislation that dramatically simplifies the tax system for 90% of the American people, gives huge tax cuts to middle-income and working-class people, and really doesn’t do much for the wealthiest in our nation would be wildly applauded by the media and by the bulk of the voters in this country.

Sadly, it’s hard to make laws during this bitter Age of Cynicism.  Even good laws.

Diogenes was the first and best known of the Greek Cynics.  He made a virtue of being a beggar.  He was a crank who heckled Plato.

Back in days when Athens ruled the world, the Cynics were a group of men (and they were all men) who as Wikipedia put it, believed that

“...the purpose of life is to live in virtue, in agreement with nature. As reasoning creatures, people can gain happiness by rigorous training and by living in a way which is natural for themselves, rejecting all conventional desires for wealth, power, sex, and fame.Instead, they were to lead a simple life free from all possessions.”

These days, cynicism has morphed into an overwhelming distrust of everything that anybody does, especially in the political arena.

Teddy Roosevelt once said, “It is not the critic who counts; not the man who points out how the strong man stumbles, or where the doer of deeds could have done them better.”

Alas, if only that were the case.

These days, it seems, it is only the critic that counts, the man who points out how the strong man stumbles or how the doer of deeds should have done them better.

We live in a cynical age, where the media spins its own conspiracy theories, where they connect the dots to stop progress, to achieve a political agenda, to preserve the status quo.

It is alarming to see how they spin the tale about how this tax bill is a sop to the rich and how it will destroy the poor.

How does inspiring growth of nearly four percent hurt the poor exactly?

Make sense, right?  If you don’t pay, you don’t play.  But that’s not how the media twists it.

The Democrats are making a cynical calculation that because politicians are so disliked by the average voter, that they can make the claim that this tax cut is a tax cut for the rich and by saying that loud enough and consistently enough, that it will somehow be true.

But it is not true.

Much will be said about the tax cuts for big corporations.  But Democrats know that their rhetoric on this is complete bullshit.  They know that companies have been fleeing America’s ridiculously high corporate tax rate for years and that something has to be done about it.

President Obama himself had his own plan to dramatically lower America’s corporate tax rate, not perhaps as low as President Trump, but dramatically nonetheless.

And the reason to do this:  Because we want companies to locate here, in America, not in Ireland, not in Japan, not in the UK.   It seems pretty obvious to me.

But to the Cynics and to those who like to prey on the bitter cynicism that has infected our body politics, nothing will ever be good enough.

I saw a bunch of aging cranky white people getting placed in police vans after they protested against the Republican plan to grow the economy.

I imagined how many of these folks were probably protesting in the 1960’s for sexual liberation and against Vietnam, in the 1980’s against Ronald Reagan and for a nuclear freeze, in the 2000’s against Dick Cheney and Iraq, and now in 2017, against Donald Trump and the Republican tax cut bill.

They have spent a lifetime of protest.  I guess that’s their right.

But when the Senate passes this tax bill and when the economy grows and when American companies come back to America, and when competition for workers becomes so intense that wages spike, we can tell the critics to go stuff it.   We might live in an Age of Cynicism, but that shouldn’t stop us from moving the ball forward and making America a great place to do business again.