On the one hand, you have Republican strategists trying to play down expectations so that when they win big, it will come as a big surprise. 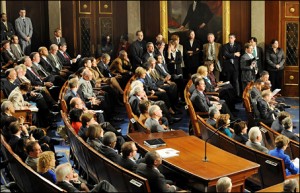 Republicans hope that their numbers in the chamber will grow in 2010. (Photo by Nikki Kahn/The Washington Post)

On the other hand, you have Democrat strategists trying to pump up their base by saying all is not lost.

Of course, nobody can predict the future, but by spinning the present, the strategists on both sides hope they can shape it.

Here are the facts:

The number one accomplishment of the Democratic Congress is their health care law and that is one of the top issues that Republicans are running against. The health care law is extraordinarily unpopular with the people who are most likely to vote (or are voting now). That is not a good sign for the Democrats.

The unemployment rate is not budging and the President is not talking about it much, if at all. The Democrats will take the fall for the lack of success on jobs.

The Democrats left Congress without addressing the impending tax disaster that will hit the economy in 88 days. This kind of irresponsibility usually spells doom in an election.

Republicans, with the help of several outside groups, have neutralized the Democratic money advantage. They have just as much money as the liberal groups.

Democrats are trying to make this a local election by going on offense to attack Republican candidates with a viciousness that has rarely been seen in the national media. It is there only hope to stop the wave that has been building since a year ago last August.

Midterm elections tend to attract men, married people, white people and old people. According to the latest polls, Obama is polling 43% among men, 39% among married people, 38% among senior citizens, and 36% among whites, according to Gallup.

One party rule is not easy, and the Democrats have shown once against that they are incapable of moving the center when they control all the levers of power. Their lurch to the left continues to gravely concern voters in the middle and the right. Resurgent Republic’s Gary Andres did a poll asking Americans whose control of the Congress would most concern them. Andres says this about the results: “Surveys rarely ask voters whether they worry more about Democrats’ or Republicans’ running Congress, but in a recent poll I helped conduct for Resurgent Republic, we did just that. We asked voters what worried them more, “a Republican majority in the House or Democrats maintaining the majority in the House (or Senate).” And by a 16-point margin (51 percent to 35 percent), voters said Democratic control worried them more. Among those “certain to vote,” the Republican edge grew even larger, to 26 points on the question of the House majority.”

The spin is that this election will be close, and who knows? That may be true.

But my guess is that the Democrats are going to get trounced this November. Big time, as Dick Cheney might say.