Solving the Problem With Maria 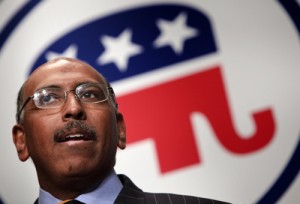 Michael Steele is a very personable guy. He has plenty of charisma. He is likeable. He is good on television (from a television producer’s perspective).

And when he was at the helm of the RNC, good things happened.

But let’s not kid ourselves.

Steele has been a disappointment as the RNC chair.

He lost the trust of big donors, who didn’t think he was spending their money in a careful way.

He didn’t organize very well. The Republican ground game, as organized from the RNC, left a lot to be desired.

Steele did nothing to help invigorate a positive debate on policy proposals for the future. He didn’t do much to create training programs for future Republican leaders.

As a communicator, he was undisciplined and would frequently say things that were completely off-message, i.e. when he said earlier this year that Republicans weren’t ready to take control of the House.

It is time for a new direction for the RNC.

What the Committee needs now is a top-notch organizational genius who can rebuild the grassroots capabilities of the Republican Party. It needs someone who is not going to be a show horse that shoots off his or her mouth. Rather, now more than ever, it needs a work-horse who will build the party up, block by block, street by street, county by county.

We don’t need a glib salesman now. We have plenty of party leaders who can speak out on behalf of Republican principles. We have John Boehner and Mitch McConnell. We will soon have about 15 Presidential contenders who are all going to be trying to define the future of the party in their own image.

The last thing the Republicans need is another pontificating voice. What we need now is structure.

How do you solve the problems left by Michael Steele? The lack of fiscal integrity? The collapse of grassroots capability? The undisciplined messaging?

You hire Maria Cino, who is probably the best organizational person on the Republican team.

You hire Maria because she isn’t going to be doing this job to gratify her own ego, because Maria doesn’t have an ego.

You hire Maria because she knows all the players all over the country.

You hire Maria because Maria doesn’t go off message.

You hire Maria because she has the ability and the track-record get the Committee back to what it once was, an overpowering political force.

You hire Maria because she has been a success at whatever she has done, from plotting the strategy to take back the House in 1994 to planning Republican conventions to being an important cog in the Bush Administration.

You hire Maria because she can solve the problems and she will do it without a lot of drama.

The RNC should salute Michael Steele and send him on his way to a gig at Fox News. Then, it should hire Cino, because nobody can fix this problem like Maria.