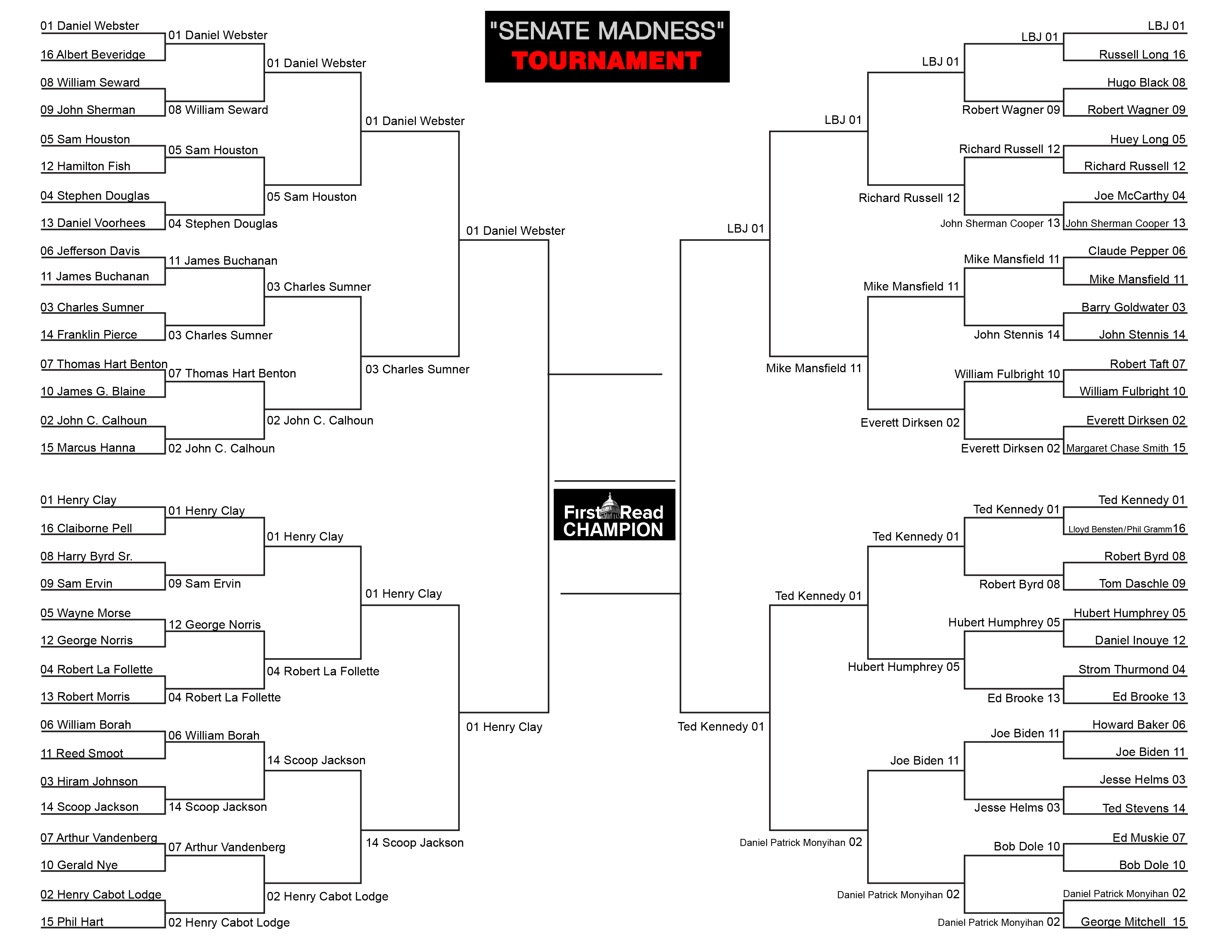 Chuck Todd and his crack team of political smart guys have put together a very useful Final Four tournament of the greatest Senators in history.

I love the concept.  I think is a great way to look at the history of the Upper Chamber and to review for people how great Men (and they were all men but one in the First Read tournament) impact history.

I gave Chuck a hard time about his Final Four because Henry Clay was a House guy, perhaps the most influential Speaker in the history of the House, and he shouldn’t be tainted with the Senate label.  Similarly, Lyndon Johnson, while a very effective Majority Leader, is most famous for being President, not for being a Senator.

If I was organizing this Senate Final Four, I would have broke it down into four regions, and I would have made it a requirement that the Senators be known primarily for their work in the Senate, not for outside activities.

The Four regions would have been the East, the South, the Midwest and the West.

The Sweet Sixteen would have broken down this way:  From the East, Daniel Patrick Moynihan, Ted Kennedy, Henry Cabot Lodge and Daniel Webster.  From the South, it would have been Richard Russell, John C. Calhoun, Jesse Helms and Robert Byrd.  From the Midwest, I would have had Robert LaFollette, Bob Dole, Everett Dirksen and Stephen Douglass.  From the West, I would have put Mike Mansfield, Barry Goldwater, Ted Stevens and Scoop Jackson.

In my final eight, I would have pitted Daniel Webster vs. Daniel Patrick Moynihan in the East, Richard Russell vs. John C. Calhoun in the South, Everett Dirksen vs. Bob Dole in the Midwest, and Ted Stevens vs. Mike Mansfield in the West.

In the Final Four, it would be Daniel Webster, Richard Russell, Everett Dirksen and in an upset, Ted Stevens.

The final two would be Richard Russell vs. Everett Dirksen, the man who fought against civil rights vs. the man who made it happen.

And of course, in my view, Dirksen would win in a blowout in the final game.

As you can see, if they name a building after you, you get more street credibility than if they don’t in my brackets.  And if you are on the right side of history, you win in the final contest.