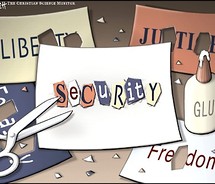 My son Jack loves to jump around. He is a five year old, and he likes to jump on furniture, jump down the stairs, jump up and jump down.

He is a jumper.

I think it is pretty funny. I like to give him the freedom to jump around.

My wife doesn’t think it is funny. She worries that he is going to kill himself.

Freedom vs. Security. That is the debate at the heart of almost every legislative battle that faces Washington too.

In other words, about 80 percent of our federal budget is dedicated to making the world less risky and more secure.

That doesn’t leave a lot of room to promote freedom and opportunity.

George Bush got himself re-elected because the so-called “security moms” went for him big time.

The Tea-Party movement is totally into the freedom thing, and it is pretty much dominated by men, at least according to the polls.

They believe that the country is taking a terrible turn away from freedom and they are willing to sacrifice some security to get their freedom back.

Ron and Rand Paul are perhaps the biggest proponents of this concept. They don’t like the Patriot Act, they are more than willing to cut the defense budget. They want to pull back America’s security commitments overseas. They also want to cut way back on entitlement spending.

For them, liberty is the issue, not security.

On the other side of the issue, liberal Democrats believe that we should take the risk out of life by extending social insurance programs no matter what the cost.

For them, liberty rarely comes up. For them, it is all about making people more secure in their daily lives.

The American consensus is usually somewhere in the middle. People want liberty, but they want to feel secure too. They don’t want too much risk, but they don’t want opportunity snuffed out either.

The budget battle is rehashing this debate one more time. Do we want liberty or do we want security? Or do we want a little bit of both?