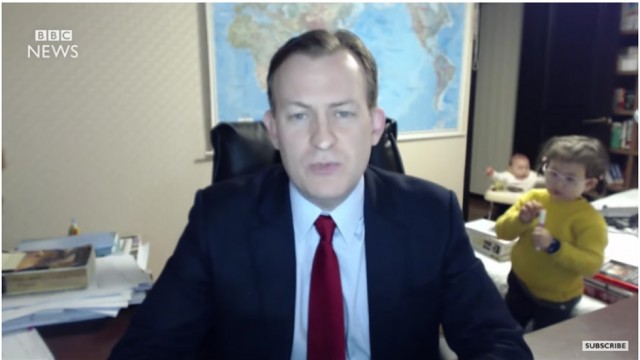 (Also Published in The Hill)

The video captured the imagination of internet denizens the world over. An expert on South Korean foreign policy, Robert E. Kelley, is speaking via Skype to the BBC, when he is joined by his 5-year-old daughter, and then a 9-month-old toddler who wheels in on a baby-walking contraption.

Kelley tries to keep a straight face and continue on with the interview as his wife swoops in and escorts the interlopers out of the room and out of sight of the BBC audience.

The whole thing is absolutely hilarious. What was at the beginning just another talking head interview swiftly became a Facebook sensation, shared by millions of people who previously never had watched the BBC in their lives.

If I were Kelley’s children, I would have been interested in what he had to say, too.

After all, if things go wrong in our dealings with the mad man in Pyongyang, Kim Jong-un, it’s the kids who will face the brunt of it.

The South Koreans just impeached their president, and if the ruling conservative party is ousted in the upcoming election, the liberal party could radically change directions in that country’s dealing with their cousins to the north.

This little snippet of Kelley’s domestic life reminds us all of what the stakes are for all of our children when it comes to public policy.

When Paul Ryan (R-Wis.) made it a condition to be able to see his children every weekend if he were to become the Speaker of the House, he was criticized by some who thought he was being selfish by putting his own personal concerns above those of the country.

I had a different take. I think policymakers should spend more time with their children, not necessarily because of their responsibilities as parents, although that is vitally important, but rather because it reminds them of their duties in office.

It used to be assumed in America that every generation would improve upon the earlier one. Our kids would be smarter, better fed, live longer and have better opportunities than we did.

But that’s not assumed any more. And there is plenty of evidence that we aren’t generationally improving either.

Our politicians rarely put the concerns of children first when it comes to policy decisions, and that is reflected in our budget priorities. We spend far more on entitlement programs for senior citizens than we pay for education and child welfare programs.

And in every budget, we put far more on the federal credit card than we put away in a rainy-day fund. The kids — or their kids — will pay for it eventually, or at least pay to service the debt that we accrued.

That’s because kids don’t vote, but their grandparents do.

And until the grandparents insist that policymakers think more about the future than they do about the present, things probably won’t get any better for the kids.

Mr. Kelley’s response to his children’s invasion was pitch perfect. He didn’t get flustered and he kept the interview going against all the odds.

It’s not easy to do. I have done radio interviews from my house with my kids carrying on in the background, and it can be quite distracting.

But kids shouldn’t merely be a distraction. They should be central to our policy discussions.

Ryan is one of the few politicians who keep our nation’s children in his mind with every public policy decision. He is the one who keeps putting entitlement reform back on the agenda. He is the one concerned enough about poverty to put a proposal to deal with it on the table. He is the one who worries about public discourse and its impact on our kids.

His colleagues on both sides of the aisle should follow his lead. After all, it is all about the children. Or, at least, it should be.