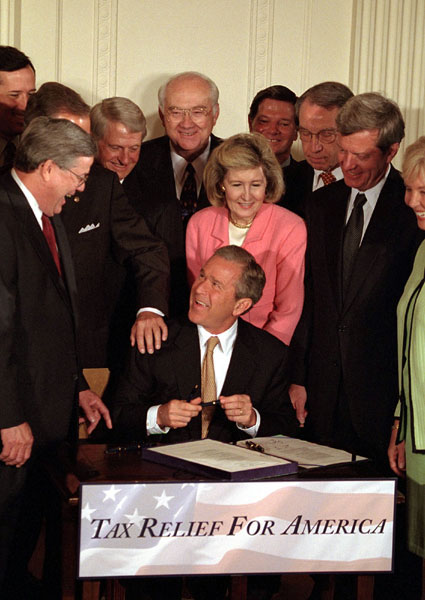 Sure, it was Bush who signed tax legislation a decade ago that is set to expire at the end of the year.  But Bush is no longer President.  Obama is the President, and he is the one who seems more than willing to allow tax increases to spring immediately into place.

The Democrats look at the tax code and they lick their chops.  They see an opportunity to get more money from wealthy taxpayers and more campaign contributions from lobbyists looking to influence tax legislation.  They have done absolutely nothing to change the status quo on our tax laws.  They want to continue the status quo because they like the way tax increases are going to come, whether they do nothing or not.

Perhaps the biggest failure of the Republicans' control of Congress and the White House came with their inability to fundamentally reform the tax code.  Worse, they failed to deal with the ticking time bomb that comes next year with the estate tax, the tax on capital gains and dividends, and the rate increases.  They also failed to deal with the creeping problem of the alternative minimum tax, which eats up more and more of the income of the middle class Americans.

That wasn’t for a lack of trying.  Mr. Bush did propose a commission that came up with a bunch of meaningless recommendations that were ignored by both the Finance Committee Chairman and the Ways and Means Committee Chairman.

The tax code has become a real albatross around the neck of economic growth.  Its uncertainty is bad enough (and a pretty good explanation why so much capital is sitting on the sidelines).  But the American corporate tax rate is unnecessarily punitive to business growth, the international tax system promotes the exportation of jobs and makes our products unnecessarily expensive.  And the fact that about half the country pays nothing in federal taxes (the lower half) creates a troubling dynamic where the tax code is now promoting a direct wealth transfer from the richer half to the poorer half which goes against the American ideal.

The Bush tax cuts that are expiring are now Mr. Obama’s problem.   He can do what he wants with them, especially now that he runs the government with wide majorities.  Republicans should not get suckered into a debate about the efficacy of keeping those tax cuts in place or not.  They should instead be talking specifically about their plans to enact either a FAIR tax or some other kind of fat tax scheme which will make America more competitive in the future and make the American people more confident that everybody is paying their fair share.