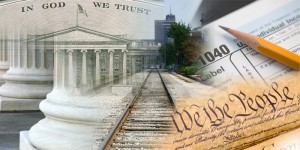 Reduced to the absurd.

Ideologues on both sides of the philosophical divide fall dangerously into this trap.

Government exists because it must. As much as some might wish it away, the world requires that order be achieved by some governmental structure.

We are fortunate here in America because our founding fathers had the presence of mind to create a constitutional system whereby as much as possible, we govern ourselves through our participation in a representative democracy.

Without government, there would be chaos.

Governance has been an evolutionary process. We learned from the Greeks how to do it (Madison, Mason, Jefferson and Hamilton knew their Greek history well), but learned from the English as well, from people like John Locke and Thomas Hobbes.

None of the Founding Fathers thought that we could get away with no government. They just didn’t want oppressive, unfair, unjust and un-representative government.

So what do we need government for?

Well, we need government to keep the peace, both from domestic trouble-makers and from international enemies.

Government has a role to play in making certain our food supply is safe, our water is drinkable, our air is breathable. It is fantasy to believe that the government has no role, that the market-place will take care of this itself. It won’t.

The government has a role to play in transportation and infrastructure. These days, that includes not only roads and bridges, but also broadband and spectrum.

Conservatives hate the idea of the government declaring eminent domain on occasion, but if you want to have highways and trains and an Internet super-highway, the government once again has to have the power to decide where to build them.

Government has a role to play in protecting and maintaining the value of our currency. Some think that the government has no role, but the fact of the matter is that a stable currency backed by the government promotes economic growth and greater progress.

Government has a role to play in education. If we are a nation of dolts, we won’t last long as a nation. Thomas Jefferson certainly thought that education was extraordinarily important, as did most of the other founding fathers.

We have made the determination over the last 60 years that health care should be a government priority. Government helps to fund research into ground-breaking cures. That funding should continue. Government should and does provide a basic level of health care to those who can’t take care of themselves. As a society, we believe in this social safety net. Getting rid of it would be a tremendous mistake.

Government also has a role to play in defining our future in the heavens. Exploration of space is not some luxury that we can pawn off to another generation. It is a necessary investment into a brighter future for our country.

We can have an argument over how well the government is doing in spending these resources on behalf of the taxpayers. We can find ways to improve the private-public partnership. We can always work to get rid of waste, fraud and abuse.

But we shouldn’t believe that we can get rid of all government. We can’t. Government plays an essential role in providing order to our society, as does the private market place (as does personal morality, by the way).

Ideologues must resist the danger of having their arguments reduced to the absurd. We can’t get rid of all government, as much as we may dislike the government we currently have. It would lead to a breakdown in the social order, something our founding fathers knew only too well.