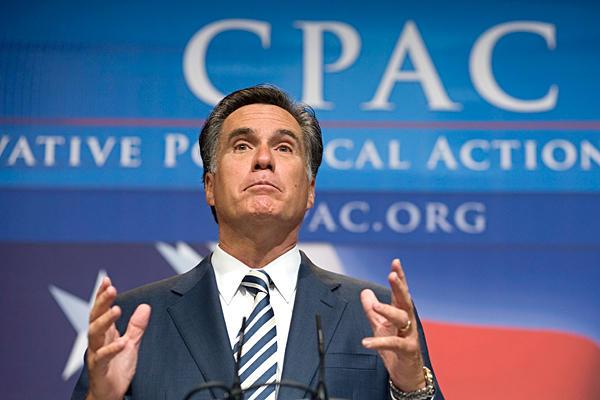 For those who don’t know, CPAC is an annual meeting of young and old conservatives.  The young guys are usually college students or recent graduates who are looking for honest work and are passionate about their conservative beliefs.   The old guys are folks who have made their living at conservative politics and use CPAC to confirm their worth or to sell their wares.

Ever since George Bush left the White House, CPAC has endorsed Ron Paul to be the standard bearer for the party.  So that gives you a sense of CPAC’s grounding reality.

Romney is addressing CPAC because if he didn’t, it would have been a big story about how he has dissed conservatives once again.  That’s not a great story for the former Massachusetts governor, so he is going to preach to a choir that usually sings a different song from the one he is preaching.

The media is fascinated with CPAC because all the big Republicans address the crowd, and usually they can find a good story about how conservatives are disillusioned with whoever is running the GOP at the time.  That story never seems to get old, even though it is a very old story.

Romney lost three recent elections to Rick Santorum (although not that many delegates) proving to his campaign that if he doesn’t run a blisteringly negative campaign, he will lose.  Because Romney didn’t run any campaign (neither did Santorum if you think about it), the natural default for the GOP is to reject whatever positive messages he is selling, and embrace an authentically conservative message.

The Romney campaign, of course, is going to learn, then, that the only way he can win is by beating the shit out of his opponents.  And they are probably right, although I think that is more than a little bit sad.

I wish Mr. Romney would offer more realistic honesty to the GOP faithful.

My own view is that the biggest problem facing America today is not the budget deficit.  Budget deficits are solved by fixing the numbers, which means less spending and more revenue.

The biggest problem facing America today is the trust deficit.  We don’t trust our government, our institutions, our neighbors, or our leaders.

And I think what we need is not poll-tested bullshit and empty rhetoric.  What we need is some realistic honesty.  We need some achievable ideas that will fix our economy in the short-term and our budget in the long-term.  We need practical solutions to every day problems that face the federal government.

I think the conservatives at CPAC would appreciate some realistic honesty.  It might not be the red meat that they crave, but hearing the truth would do wonders for their political outlook.