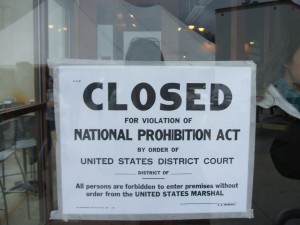 Reading the Constitution out loud on the House floor in the opening days of the new Congress was a masterstroke by Republicans.

Had I had the chance, I would have advised them to read the whole thing, because it is useful to understand our nation’s history.

Much has been said about the decision to not read sections pertaining to slavery and I won’t revisit that debate.

Not enough has been said about the 18th Amendment and then about the 21st Amendment.

It has real ramifications for today’s public policy decisions.

I just got done reading Daniel Okrent’s brilliant book, “Last Call, the Rise and Fall of Prohibition” and for those who want to learn about the legislative process and how special interest groups really operate in Washington, you should read this book.

There are many very interesting vignettes in “Last Call”, but there are two main points that deserve special attention.

First, Prohibition got passed initially for good reason. People were drinking too much around the turn of the century, and it had a very negative impact on society. Women were quite often the victims of the nation’s obsession with alcohol, and they were the ones who successfully drove it to eventual passage.

The ones who kept Prohibition the laws of the land was a so-called coalition of Baptists and Bootleggers. Religious conservatives hated the demon rum, so quite obviously, they pushed to ban its use. Bootleggers, who make millions on the illicit market place, were only too willing to keep booze illegal.

Second, after Prohibition was repealed, drinking actually went down in America. That is the crucial point. Once regulations were put in place, and once the thrill of drinking illegally faded away, the average consumer drank a lot less.

I make these two points in the context of our current public policy.

We currently impose prohibition on two activities that many Americans like to do every day (marijuana use and internet poker).

Like alcohol prohibition, the religious conservatives are the principle reason that we make these activities illegal, but they aren’t the only one. The beer industry, for example, sees marijuana as a competitor, and they helped defeat the pro-pot initiative in California. State lotteries see the internet gaming industry as a competitor, and so they strongly opposed efforts to repeal the Unlawful Internet Gaming Enforcement Act, gambling’s equivalent to prohibition.

My guess is that if we legalized both, the market place would protect consumers and provide greater safety to users, much as what happened in Prohibition. And I bet you, like with Prohibition, there would be fewer users.

Prohibition didn’t work in the early 20th century, and it doesn’t work now. The marketplace is the marketplace. If people want to engage in an activity that is personal in nature, whether that activity is drinking booze, smoking pot or playing cards online, the market is going to serve those people.

It seems to me that common-sense regulation is actually better for consumers and for the general public than Prohibition.

Having the members read that part of our nation’s history on House Floor would have been instructive.