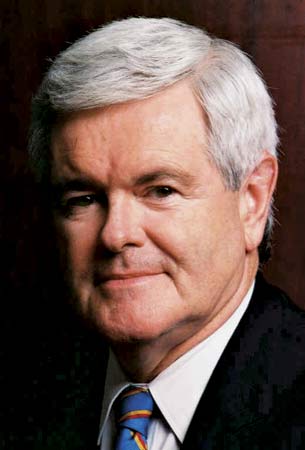 I first met Newt Gingrich in 1989. As an intern for House Minority Leader Bob Michel, my short-term task was to deliver Newt his lunch as he was meeting with a Michel staffer. The lunch consisted of a fruit plate. Newt was trying to lose weight, and apparently the fruit plate was a tactic in his strategy to achieve his vision of a slim, svelte Gingrich.

While he never achieved that vision, Newt has done pretty well for himself. An army brat with a funny name, Gingrich transformed Congressional politics forever, and established an international brand in the process.

Newt is now trying to turn that brand into presidential timber. The problem for him is that his brand might just be too big for a presidential campaign.

Gingrich’s tenure as Speaker was the most aggressive since Henry Clay. Like Clay, Newt wasn’t content to run the House. He wanted to run the country, and in many ways, he succeeded.

Newt’s bombast suggests a right-wing conservative, but his actual ideology is much more activist in its roots. Like Clay, who promoted a national system of roads and canals in the mid-19th century, Gingrich is a T and I guy. As a former member of the Transportation Committee, Newt believes strongly in the power of concrete to transform a nation.

But the former Speaker wasn’t just a road guy. He was a science guy. He believed firmly in increasing spending on N.I.H funding. He has not content to just let the free market work its will. For example, health care I.T. transformation was his idea before it was Obama’s idea.

As a child of the military (although he somehow was able to avoid service himself even though he came of age in the middle of the Vietnam War), Gingrich is a student of the Pentagon and military tactics. He was the first one to call for a rapid expansion of intelligence funding, and he rightly predicted in 1996 that it would be in human intelligence where we would have to fight and win the next war.

Newt Gingrich is not your traditional Southern conservative, even though he made his bones working up the chain in Georgia Republican politics. His fiery rhetoric masks a serious thinker. Sadly, the mask too often overwhelms the thinking.

Gingrich is all too often self-righteous and hypocritical. You can’t preach family values and then practice serial infidelity and expect to get away with it. You can’t move to impeach a President for fooling around with an intern and at the same time, carry out an affair with a staff member who works, in a roundabout way, for you.

Gingrich rose to power by destroying a Speaker who ran afoul the ethics rules. Gingrich himself fell from power by running afoul of the ethics rules. Both the man he brought down (Jim Wright) and Gingrich ran into trouble because of books they wrote. You would think that the Newster would understand the Congressional perils of authorship, but apparently, he forgot.

Post-Speakership, Gingrich has stayed in the limelight by making notorious pronouncements, usually by making this accusation or that accusation against either Barack Obama or somebody Obama has nominated. Gingrich likes to make sweeping generalizations in ways that are needlessly polarizing and often irresponsible. He does this because he likes to get attention and because he likes to fire up the conservative base.

I think he also does this because he believes that the only way that he can get the hard-right to really like him is if he makes them believe that he is as crazy as they are.

The dirty little secret is that Newt isn’t really that crazy. He is smart. He is sophisticated. And he has a bunch of really good ideas. But don’t tell anybody. It might blow his cover.