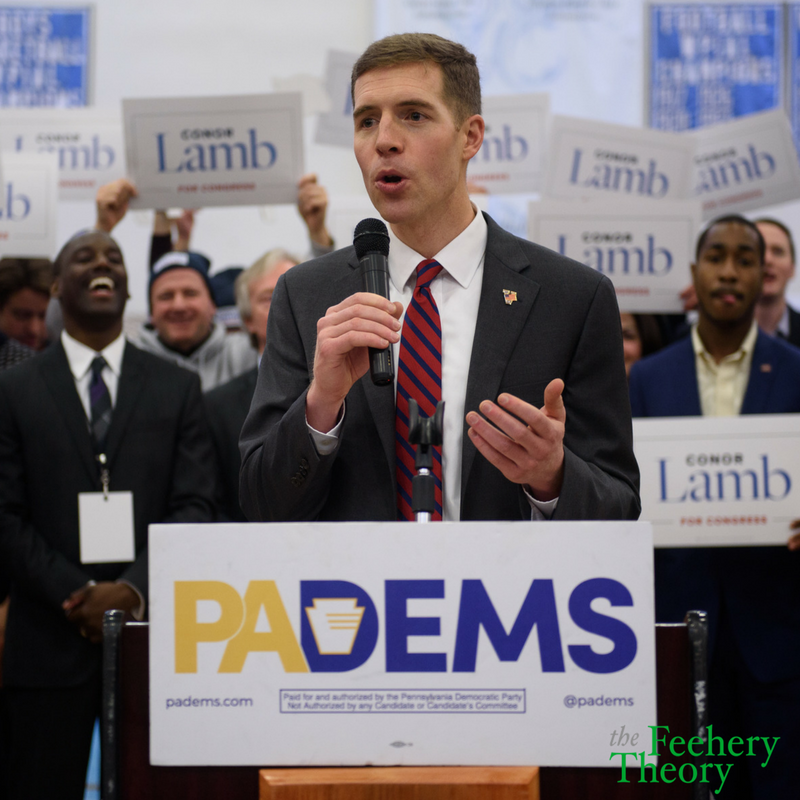 In like a Lamb, out like a lion. The ides of March are upon us, or so thought the University of Virginia, who was stabbed in the back by the plucky team from UMBC.

The first upset of a number one seed by a 16th seed happened one day after the annual anniversary of Caesar’s loss to Brutus. And it served as a cautionary tale to all who make assumptions about the future.

Mann Tracht, Un Gott Lacht is the old Yiddish saying about those who confidently predict the future. Man plans, and God laughs.

The election of Conor Lamb, of course, means that the Democrats will take back the House.

Except it means no such thing.

The future is not yet written.

Washington is full of senior executives who were hired precisely because they were perceived to be close to the Clinton team. They have stayed around because nobody is close to the Trump White House.

And the current president doesn’t make it easy for the Washington establishment to get close to him.

He is unpredictable, profane, uncouth, and worse, he is not a politician, by any ordinary sense of the word. He says whatever is on his mind, to whoever will listen.  Which thanks to the wonders of Twitter, is everybody.

Michael Kinsley famously said that a Washington version of a gaffe was telling the truth accidentally. Trump tells everybody the truth as he sees it (although the fact-checkers might have a different view). And it has become very clear that the American media can’t handle that truth.

The question remains: Can Republicans hold on to power despite the March madness?

And by madness, I don’t just mean the NCAA basketball tournament.

I mean the firing of Andrew McCabe, the supposed forced retirement of H.R. McMaster, the uncertain fate of the beleaguered John Kelly, the continuing investigation by Robert Mueller, etcetera etcetera.

The answer is yes, of course they can.

It will require of them a better campaign apparatus and some solid legislative accomplishments and perhaps some good wedge issues to get the base excited.

This thing is not over until the game is fully played.

My Final Four bracket is in sorry shape, but what gives me great hope is the fact that everybody else is facing the same problem.

I look at the sorry state of the Republican Party only to be comforted by the even sorrier state of the Democratic Party.

Winston Churchill once said: “Democracy is the worst form of government, except for all the others.”

The American political equivalent is “The GOP is the worst political party, except for the Democrats.”

Conor Lamb won his election, narrowly, by stating unequivocally that he would not support his party’s current congressional leader in a vote for Speaker.

Talk about a pyrrhic victory for Minority Leader Nancy Pelosi (D-Calif.). Thirty or 40 more wins like that and pretty soon, she won’t be able to beat Rep. Joseph Crowley (D-N.Y.) in a head-to-head matchup.

The problem for the Democrats is that where Lamb pivoted to the middle, most progressives running in these open seats think that Nancy Pelosi is not liberal enough. They want to move aggressively to the left and they are more than willing to sacrifice moderate Democrats in their race for purity.

Case in point, the race being held today on the Southwest side of Chicago, pitting Rep. Dan Lipinski against Marie Newman. Lipinski is a pro-life Democrat, which means to most progressives that he might as well be Mike Pence. It’s a white ethnic, culturally conservative district that could swing Republican if the Democrats swing too far to the left.

Republicans should be in a strong position to win the seat if Lipinski loses his primary. Except for the fact that the only guy on the GOP ballot right now is a former head of the American Nazi party.