Man of Action Vs. The World’s Most Deliberative Body 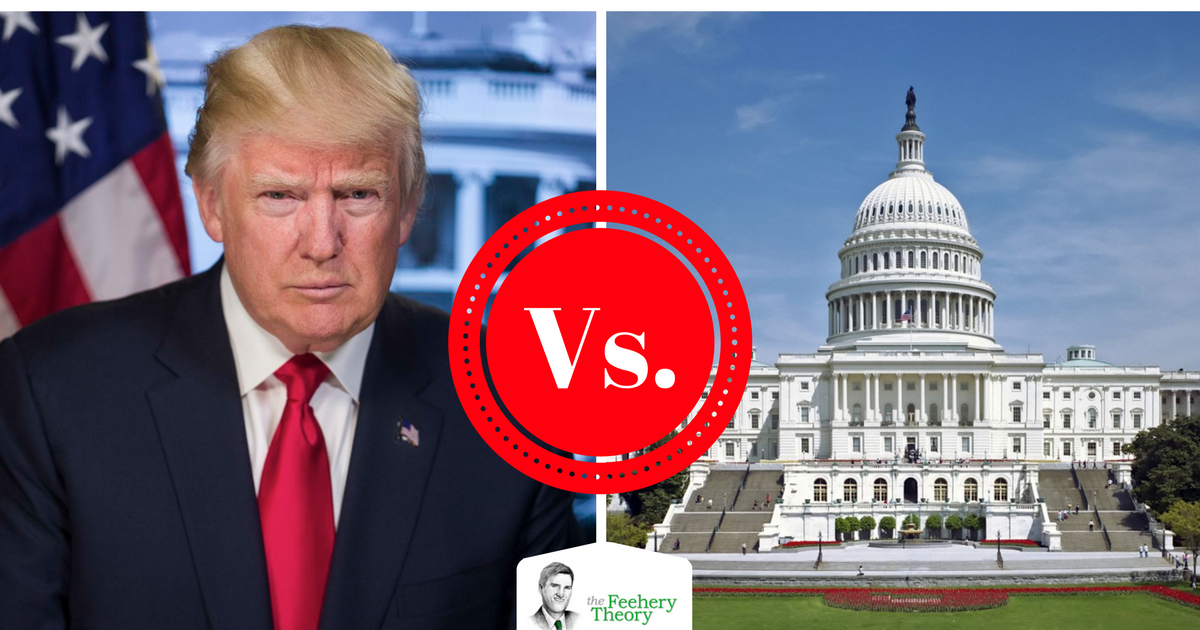 Donald Trump is used to getting his way and getting it quickly.  He ran his far-flung operations like a small business.  He was nimble, willing to cut deals, and he had at his side a small cadre of associates who jumped immediately when he told them to jump.

He fancies himself a man of action.  Like many entrepreneurs and deal-makers, Trump is used to a swirl of activity.  For a 70-year old man, he is indefatigable, up early in the morning, watching Morning Joe and tweeting to his heart’s content, working late into the night, with the O’Reilly show on in the background.

And as he took control of the White House, he has worked non-stop, issuing executive orders, meeting with automobile CEO’s and labor leaders, giving speeches, all the while tweeting away.

Under our Constitution, a President can only do so much however, and much of what he does  has to be either authorized, appropriated or approved by the Legislative Branch.  And as envisioned by our forefathers, it is the Congress that should be first among equals of the branches.

The new President made mention of the people during his inaugural address.  In fact, he said, “What truly matters is not which party controls our government, but whether our government is controlled by the people. January 20th 2017, will be remembered as the day the people became the rulers of this nation again.”

Our Founding Fathers thought of the Congress, more specifically, the House of Representatives, as the place where the people ruled.  It would later evolve, with the direct election of Senators, that both bodies would directly represent the will of the people.

Our Constitution has other interesting and long-forgotten features.  Article I has ten sections that spells out specifically the powers vested in the Legislative Branch, including 18 very specific duties as laid out in Section 8.  Article II, on the other hand, has only 4 sections, one of which deals with the power of the Congress to impeach a President who deserves impeaching.

In other words, Presidents come and go, but it is in the Congress where real power resides, should the Congress seek to exercise it.  Unfortunately, over the last several decades, Congress, beset by partisanship, has steadily ceded power to the Executive Branch, allowing it to get away with war-making without authorization, regulating without proper legislative authority, and spending without the proper appropriations authority.

Congress has also ground to a halt when it comes to acting on long-festering problems that face the country.   They haven’t been able to reach agreement on fixing our broken immigration system, on repairing our decrepit national infrastructure, on overhauling our outdated tax code.  The one big accomplishment that has been achieved over the last decade, the Affordable Care Act, has proven to be exceedingly unpopular with half the country, making its repeal the first item on the new President’s agenda.

It is this frustration with inaction that compels our new President to say, “We will no longer accept politicians who are all talk and no action -- constantly complaining but never doing anything about it.  The time for empty talk is over. Now arrives the hour of action.”

And so here we stand, a President who has little defined power, as envisioned under our Constitution, but who has big plans that he wants to move quickly pitted against a Congress that has real power, but is seemingly loathe to use it or at least use it quickly.

The key figure in resolving all of this for the new President is Mitch McConnell, the Senate Majority Leader.

He is not much of a talker, not a particularly eloquent orator, not somebody who loves the sound of his own voice. But unlike the reputation of the Senate, McConnell does know how to act and act quickly.  He pounces when the time is right to cut a deal, he designs the strategies to save the Republicans from their own irresponsible rhetoric.  He is the one in the room you can count on to make certain that Congress doesn’t pierce the debt limit, doesn’t keep the government permanently shuttered and otherwise keeps the train on the tracks.

With the new President, it will be McConnell who is the one indispensable man.  He will be the bridge between the new Man of Action and the world’s most deliberative body.

It won’t be easy. But nothing worth doing ever is.