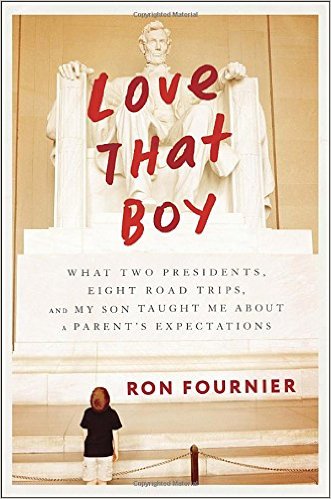 Twice over the last 5 years, I have sported a nice black eye, both caused by my rambunctious son Jack.

One time, he head-butted me accidentally when we were wrestling. The second time, he threw a fastball that my glove couldn’t quite catch up with.

Nobody ever said that raising kids was easy.   I have the marks to prove it.

That being said, Jack (and his sister Molly) are clearly the best things that have ever happened to me and being their father is now my favorite job (but not my only one).

Ron Fournier’s “Love That Boy”, a book about his son and their travels around the country is cracking the best-seller lists and gaining rave reviews.

Frank Bruni wrote a column about the book and about how fathers are changing their game when it comes to raising their kids:

“As a child I was schooled constantly in how different mothers and fathers were. TV shows spelled it out. So did examples and conversations all around me, including in my own home.

And while mothers felt pressure to lavish time and affection on their children, fathers could come and go. As long as they did their part as providers, the rest was negotiable…

The book shows how Fournier came to heed it and is written as a plea that all parents see their children clearly and adjust their expectations accordingly. But as I read it, I was struck by an additional theme, something between the lines. Fournier’s narrative is about fatherhood — specifically, fatherhood in the here and now.

He examines his paternal feelings and failings with a nakedness that was rare in fathers of a previous generation. He wrestles soulfully with what kind of father he is and means to be. He weeps. He trembles.

And he mirrors many of today’s dads, who are so changed from yesterday’s. In Fournier I saw my two brothers, who don’t adore their children any more than our father adored us but who do it with a gentler, tenderer touch, unafraid to broach discussions and display emotions that most men once shrank from.”

I haven’t read the book yet (I will Ron, I promise) but I was struck by Bruni’s insights that came from it.

Most men learn about fatherhood from their own fathers.   Women read countless books about strategies and advice. Most guys don’t do that.

I have one friend whose dad abandoned him and his family in his youth and now he does everything he can to be active in every aspect of the lives of his children. I have another friend whose father coached him and his brother when he was young and now he coaches his sons and daughter with a singular purpose, as if to live up to his father’s model.

My Dad, who would have turned 81 on April 2nd , was pretty good at fatherhood. He was by no means perfect but in the grand scale of things, he was great.   We had a good relationship, and overcame some rocky times.

My parents were divorced when I was 13 and my brothers and I lived with him, which was a unique arrangement in the 1970’s and 1980’s.

Our house had a little bit of a Frat House feel to it. We weren’t completely out of control, but he didn’t exactly run a tight ship either.   Salutary neglect is how historians describe how the British Empire treated the American colonies before the years leading the Revolution. That’s kind of how Dad raised us. With just enough supervision to make sure we didn’t get in trouble.

That was also characteristic of the era. Back then, even before my parents divorced, it was quite common to be kicked out of the house in the morning and told not to return until dinnertime.   We played, rode our bikes, shot baskets, and otherwise did our thing, without so much of a hint of parental involvement.

But these days, if you let your kids out of your sight for more than 10 minutes, you can get hauled into court for child neglect.

Unless we work to get a play-date for our son or daughter – outside of organized sports – the guy who is in charge of getting my son out of the house is me. That means we do a lot of sports together.

I am not a young dad. Like Fournier, I am 52. But fatherhood keeps me young.

My golf game is better than his. I can still beat him one-on-one in basketball. I assume I can run a 10k faster than him (although I am not in shape to test that proposition).

I remember playing catch with my Dad when I was younger, but despite the fact that he was a younger father than I am, we didn’t do many sports together.

The most fascinating thing I have noticed about fatherhood is how invested I am in my son’s academic and athletic success.

When I was growing up, my Dad didn’t pay that much attention to my athletic career (as brief as it was). Sure, he would show up to a basketball game every once in a while, but he wasn’t going to change his schedule to accommodate mine.

I probably go to the other extreme. I love watching my son play baseball, soccer and basketball. I make certain that he has all the equipment that he needs.

I am much more of a fan of the Little League Cubs, the St. Peter’s Panthers and the CFC White Team than I am of the Chicago Bears or the Washington Nationals or even the Fighting Irish (although that’s a close call).

I am not sure that my obsession with his sports career is healthy for him or me, but I have learned a few things over the years. First, don’t ask him about the game after the game. Don’t criticize anything he did. Keep your comments to yourself during the game.   Don’t yell at him during practice. By and large, keep your mouth shut and just enjoy the fact that he is having fun. And keep making it fun for him.

Jack turns 10 today, which is why I am writing this Feehery Theory about him today.

His mother and I have learned a lot about child-rearing over the past decade. And one of those lessons is straight from the title of Ron’s book: Love that boy.

A priest friend of mine once told me that raising a child teaches  you more about yourself than you could ever teach them. And I think that is true.

Jack is a funny kid who is very talented at all kinds of things. He can make a music video. He understands all the intricacies of Mindcraft, plays a good game of chess. He hates Donald Trump and loves Notre Dame football. He is a voracious reader and he loves to write computer code. He does things that confound me and things that astound me.

I can’t help but think of my Dad when I think of my son.   Fathers and sons. And time goes on, quicker than you are prepared for, especially when your son turns 10.