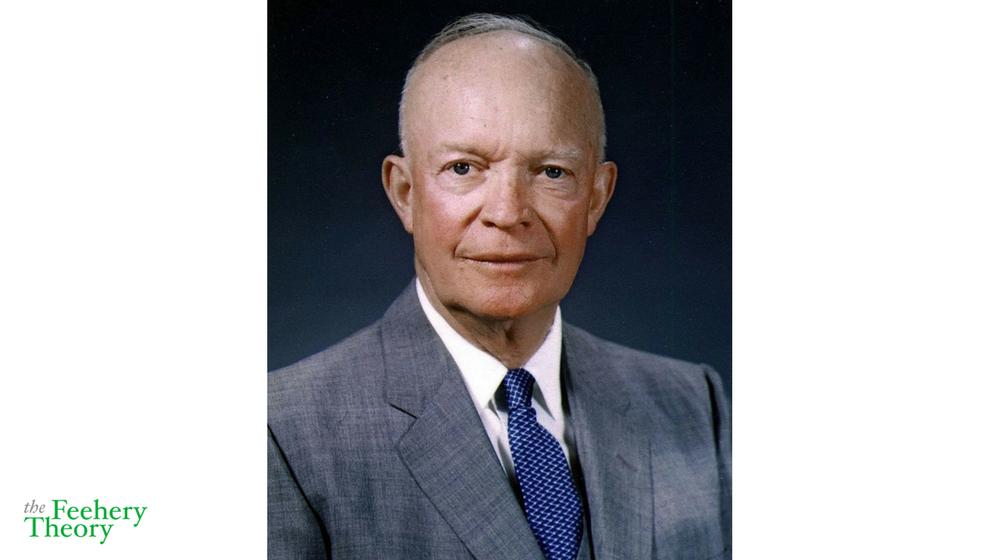 “Don’t worry, Jim, if that question comes up, I’ll just confuse them.”

So said Dwight Eisenhower to his panicked Press Secretary Jim Hagerty, as he prepared himself to meet the press.  Hagerty was worried that Ike would give a direct answer to the question:  Will you use the Bomb on Red China?

I was thinking about Ike in the context of President Trump and Bob Dole.

“A lot of people can be president of the United States, but hardly anybody can be a five-star general,” she said, pointing to a statue of General Eisenhower.

Of, not a lot of people can be President.  She can’t be President, for example.  Neither could Hillary Clinton.  Or Bob Dole.

It’s about instinctively understanding how to follow the lead of the American people.

Bob Dole ran for President three times, in 1980, 1988 and 1996.  In 1980, he dropped out early and urged Gerry Ford to run to stop Ronald Reagan.  In 1988, he lost after he bitterly told George H.W. Bush to stop lying about his record.  In 1996, he got the nomination but lost to Bill Clinton, who despite all his obvious flaws, had a booming economy prodding him along.

That doesn’t diminish Dole’s incredible contributions to our country or service to the United States Senate.

He may have been the right man, but his timing just didn’t work out.

Bob Dole, American war hero, long-time Senate Majority (and Minority Leader), Presidential nominee and dogged advocate for veterans, was and continues to be a supporter of Donald Trump.

He supported Trump over Ted Cruz.  He has and continues to be an adviser to the President.  There are former Dole staffers scattered throughout the Trump Administration.

That might be a bit of surprise to the nation’s intelligentsia, especially those #NeverTrumpers who publicly muse that the President is not only a psychotic madman but also a stooge for Vladimir Putin.

But Bob Dole is smart enough to understand the essential wisdom of the American people, who saw in Trump somebody who would shake up the political establishments on both sides of the aisle, stop and reverse the crushing encroachment of the regulatory state and grow the economy in the middle of America by reforming our tax code, re-negotiating bad trade deals and stopping illegal immigration.

Dole may (or may not) have seen some parallels between Trump and his own hero, Dwight Eisenhower.

Like Ike, Trump was a complete political outsider who could have run either as a Republican or as a Democrat.

Like Ike, Trump has promised a huge investment in our nation’s infrastructure.

Like Ike, Trump promised to seal our borders and crack down on illegal immigration.  It was Ike who came up with Operation Wetback that forcibly removed Mexican migrants and sent them packing back home.

Like Ike, Trump has threatened to use our nation’s nuclear arsenal.  Eisenhower made it clear to the Soviet Union that he was ready and willing to use those weapons, saying he would rather “be atomized than communized.”

Like Ike, Trump will never have a fully comfortable relationship with the Republican establishment or with leaders on the Hill.  Ike got along fine with Joe Martin and Leverett Saltonstall (although he dislikes Senate Republican Leader William Knowland), but he was just as likely to cut deals with Sam Rayburn and Lyndon Johnson, as he was with the Republicans.

Like Ike, Trump is a golfer.  Indeed Eisenhower’s love of golf tarnished his reputation far after he left the White House.  Between 1953 and 1961, Ike dedicated more than 1000 days to golf and he played everywhere he could.

Like Ike, Trump has a Korea problem.  For Ike, he was the one who negotiated the Truce that currently still exists today, ending the war.  Trump has had a bellicose relationship with the Kim Jong Un, but peace might be breaking out on the peninsula in honor of the Olympic Games.

Like Ike, Trump likes to confuse people as he negotiates.  Strategic ambiguity was Ike’s forte.  He didn’t necessarily want his rivals to know exactly what he was going to do.  Trump wrote in his book Art of the Deal that being unpredictable was a key part of his strategy.

I am not saying that Donald Trump is the Second Coming of Dwight Eisenhower.  But like Ike, Trump is despised by the elite but liked by the masses.

One of my earliest lessons in politics came from watching the show “Happy Days.”

As you may remember, “Happy Days” was a long-running television show starring Ron Howard as Richie Cunningham and Henry Winkler as Arthur "Fonzie" Fonzarelli. The show presented an idealized version of growing up in the 1950s.

Stevenson was an intellectual. He gave a great convention speech. He appealed to college students, especially college girls. He was from Illinois. Sound familiar?

Eisenhower was old, a military guy and nondescript as a speaker. He doesn’t inspire a new generation.

In one scene, Richie tries to get Fonzie to vote for his favored candidate. Fonzie’s reply is priceless. “Eyyyy, I like Ike.”

It was the working-class guy’s way of sticking it to the supposed elite.

Of course, Stevenson goes on to lose, while Richie ends up losing the girl. Fonzie, ever the opportunist, goes to the loser’s campaign to comfort the distraught campaign staff and ends up picking up several of loser’s ladies.

I can see the Fonz liking Trump, although I assume Henry Winkler, the actor who played him, despises him.

Bob Dole is an American hero whose own personal hero was Dwight Eisenhower.   Dole liked Ike and he likes Trump.

So put that in your pipe and smoke it.   Eyyyy.