It’s Christmas Time in the Capitol 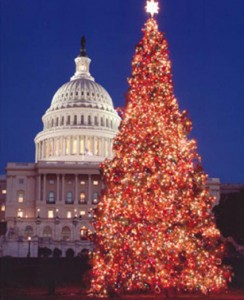 For the second year in a row, Harry Reid is keeping the Congress is session for the Christmas holiday. Thanks for that, Mr. Leader, and Happy Holidays to you too.

I was talking to a friend in St. Peter’s Catholic Church basement, and he said “Happy Holidays” to me. I said, “hey, Joe, you can say Merry Christmas, here. We are in a Catholic church.”

During the Christmas season, I say Merry Christmas. It’s not really an act of religious defiance when I say it. It is a statement of best wishes during the most universal holiday in the world. They are even celebrating Christmas in Dubai.

As an article in the New York Times pointed out yesterday, the Christmas holiday precedes Christ’s birth. In the Richard Cohen article, he points out, “Thus, although the New Testament gives no indication of Christ’s actual birthday (early writers preferring a spring date), in 354 Pope Liberius declared it to have befallen on Dec. 25.” The reason: Because the pagans used to celebrate the Winter Solstice on that day in the Saturnalia festival, and well, if you can’t beat them, join them.

Christmas has evolved from a pagan ritual to a highly religious celebration, and now back to a pagan ritual, with some definite religious undertones. Capturing Christmas shoppers is now the critical marketing strategy for most retailers, starting on the day after Thanksgiving, which is coined by the media as Black Friday (meaning the first days that they reach profitability for the year).

I don’t mean to denigrate the holiday. Christmas is still a Holy time of year for many of us, and it gives us all a time to reflect on God’s love and Christ’s message. But I don’t understand why so many who don’t believe that Christ is the Savior spend so much of their time trying to stop the rest of us from celebrating this combination pagan ritual/High Holy Day, especially with symbolic displays like Christmas trees.

One company chieftain, who shall remain nameless, actually banned the display of a Christmas tree in their office building atrium. Don’t want to offend anybody, the corporate bigwig pontificated. That’s ridiculous. Who would be offended by a Christmas tree?

According to legend, St. Boniface first cut down a tree during Christmas Time to prove a point to local pagans to reform their ways. According to Wikipedia: “The custom of erecting a Christmas Tree can be historically traced to 15th century Livonia (present-day Estonia and Latvia) and 16th century Northern Germany. According to the first documented uses of a Christmas tree in Estonia, in 1441, 1442, and 1514 the Brotherhood of the Blackheads erected a tree for the holidays in their brotherhood house in Reval (now Tallinn). At the last night of the celebrations leading up to the holidays, the tree was taken to the Town Hall Square where the members of the brotherhood danced around it.”

That sounds like some office Christmas parties that I have attended through the years.

Christmas-time is usually a time when little kids get presents from their parents. The ritual is that the kids get up real, real early, and they beg their parents to wake up so that they can go downstairs to see what Santa Claus left for them. An orgy of present opening ensues, as all the little ones squeal in delight as they marvel at all their dreams that somehow came true. Parents usually use Santa Claus as a disciplinary technique. He knows who has been naughty and he knows who has been nice, as the song goes. Of course, if the parents don’t come through, they are the ones who get tagged with the scrooge label.

Nobody wants to be seen as a scrooge these days, especially politicians. But if the politicians don’t stand up and make some hard choices, the future may not be very bright for many young boys and girls in the future.

This lame duck session of Congress, like last year’s lame session (note that I dropped the second duck) share one trait; they both made the kids buy the presents. Last year, it was the health care law. This year? Who knows what the final tally will be, but I am pretty certain it will be a lot.

When Newt Gingrich shut the government down in the mid-90’s, they called him the Grinch who stole Christmas, all because he demanded that the President balance the budget.

Gingrich may have been a grinch to the media, but back then, his Christmas gift to the children was a surplus and a more sustainable debt. This year, nobody is calling Harry Reid a grinch, but perhaps that is because the kids have no idea how much all of this is going to cost.

My message to you is simple: Say Merry Christmas to everybody, even to non-believers. No matter what your faith, Christmas is the most wonderful time of the year. Unless, of course, you work in the Senate.