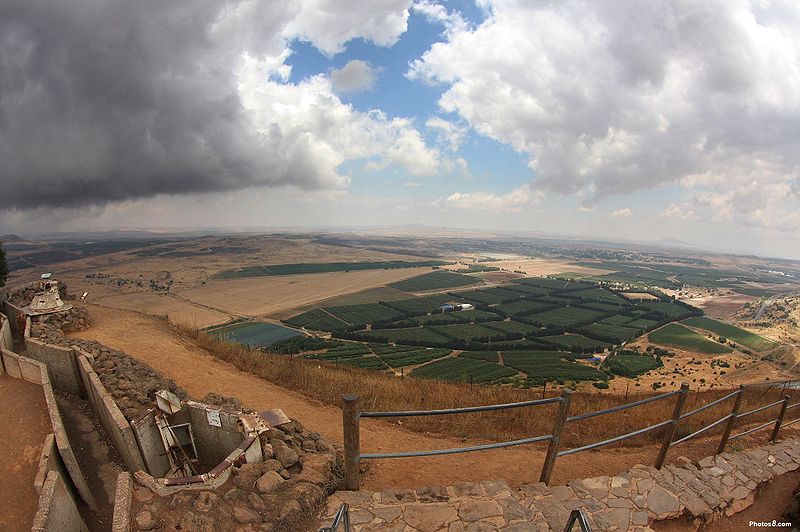 About a decade ago, I visited the Golan Heights as part of a broader trip that took me all around Israel.

Back then, visiting Israel brought out a jumble of emotions. Fear was never far from the surface. Awe came from visiting so many historically important religious sights. Claustrophobia came from the small size of the country, and the fact that the Israelis had so many bitter enemies so close to its border.

When you are on top of the Golan Heights, you get a pretty good understanding why the Israelis have absolutely no intention of giving that strategically important land back to the Syrians. They would be completely insane if they did so.

The Golan Heights gives you a towering position from which to impose your will on the region. Shooting down on attackers is far easier than shooting up on attackers. It gives the Israelis an impregnable fortress from which it can defend itself.

Now, having the Golan Heights wouldn’t be such a big deal, if for example, the Canadians were on your border. But it becomes a much bigger deal if it is the Syrians.

Syria has not been a historic friend of Israel. They harbor terrorist groups, they spout anti-Israel venom on occasion, and they have even tried to wipe Israel off the map. In fact, the reason the Israelis have possession of the Golan Heights is because the last time Syria attacked Israel, they lost Golan as a result.

President Obama suggested yesterday that Israel should return to its pre-1967 borders. If I read that right, that would mean giving the Golan Heights back to Syria.

Syria is currently going through a process of brutally suppressing a political uprising within its borders. Probably the best thing that could happen to Mr. Assad internally is to win back the Golan Heights without ever having to fire a shot. That would give him all kinds of credibility with the Syrian street, and in all likelihood, end the revolt.

Mr. Obama has made this declaration just as the Israeli Prime Minister is set to visit America and give an address to a Joint Meeting of the Congress. Apparently, Mr. Obama is attempting to embarrass Mr. Netanyahu, but I don’t think that strategy will work well for him.

The President’s decision to go out of his way to alienate Israel is dumb politics and even dumber policy. I am all for achieving peace in the Middle East, and I am not particularly a pro-Israel hawk. But Mr. Obama’s statement yesterday is dangerous and counterproductive.