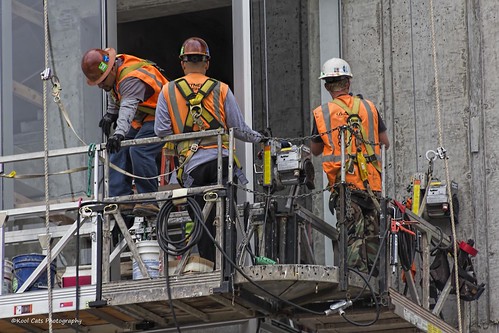 The Workers by Kool Cats Photography over 3 Million Views, on Flickr

In Ohio, a young white man was arrested for plotting the murder of a bunch of members of Congress.

Outside of Paris last week, two young Muslims were killed after they had slaughtered more than a dozen people associated with a French satirical magazine.

In Nigeria, an army of young African men and teenagers marauded the countryside, burning down villages and murdering schoolgirls.

Young men flock to Syria and Iraq, looking to fight jihad and perhaps to find meaning in life.

In Pakistan, young men join the Taliban and fight for a peculiar brand of a religion based on a taking the world back to the 13th century.

Back in America, young men, bored, out of work, sit at home, smoke pot, play video games and then get in trouble.

The world has a problem with young men.

Idle hands are the devil’s workshop, especially when those idle hands belong to young men.

Over the last 30 years, there has been a concerted effort to give young women a better chance to succeed in the workplace, at home and abroad.

Big companies promote their efforts to help young women as they start small businesses, or go to college or fight discrimination in the workplace.

I support all of those efforts and we must admit, they have worked pretty well, especially in America.

Women are now working more in the business sector than ever before.

Men, on the other hand, go to college less and work a lot less.

The labor participation rate for men is at an all time low in America.

I don’t know what the statistics are, but my guess is that young men are not working nearly as much as they used to.

Young men without jobs start revolutions.  They use drugs.  They join gangs.  They commit crimes.  They use guns.  They kill people.

This is a world-wide problem but it’s also a problem here at home.

There needs to be an effort to keep young men in school, train them for the changing economy, get them jobs, and keep them from smoking pot, playing video games and otherwise wasting their lives away.

This isn’t a black problem or a white problem or a Muslim problem.  And it’s not a problem that happens somewhere else.

It’s a here problem and a there problem.  It’s a societal problem, and we better start thinking of ways to take care of it.