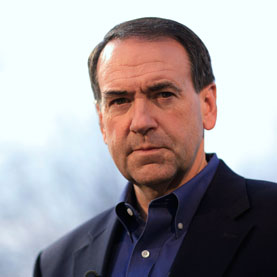 Mike Huckabee looked into the mirror and decided he didn’t want to be President. And then he went on the Fox Network and informed the thousands of people who watch his program on Saturday night of his decision.

I wasn’t one of those people who tuned in, but through the wonders of the modern media, Mike Allen told me the next morning.

Huckabee’s decision wasn’t that surprising. We all knew that he was building a big house in Florida, that he enjoyed being a television host, that his heart wasn’t into running again for President.

The irony, though, was that Huckabee had a better shot at winning the GOP nomination than just about anybody else, including the putative front-runner, Mitt Romney. After the Mittster’s disastrous health-care lecture on Thursday, Huckabee could have easily slipped into first place. But he decided that he didn’t want to run.

It is hard to know who could fill this hole, but I do believe that the rest of the field could learn a few things from his example. Here they are:

Happy Conservatism: Huckabee used to always say that while he was a conservative, he wasn’t mad about it. That is a good message in these tumultuous times. For conservatives to be successful, they cannot be angry about it. The slashing, cynical, rantings of the hard right antagonize and alienate voters in the middle, and turn off critically important independent voters. Huckabee’s brand of hopeful conservatism attracted people who didn’t necessarily agree with his socially conservative views.

Humor works: Huckabee was funny, and his self-deprecating humor worked with a bunch of people including the media. He had absolutely no money in the last campaign, but because he got the attention of bookers and producers because of his easy television presence, he was able to stay in the race until almost the very end.

Life Outside of Politics: Huckabee reminded folks that he had a life outside of politics. He wasn’t scheming every second of every day, a la Richard Nixon, to plot his ascent to the throne. Like many Americans, he didn’t think of politics every waking moment. He put it all in perspective, with his guitar playing, his marathon-running, and his preaching.

The Free-Market’s Limits: Huckabee was the first Republican candidate to raise questions about the economy under George Bush. He knew instinctively (before the financial crash) that millions of Americans were hurting. He said that the fundamentals of the economy were not strong (unlike the others in the first debate in Michigan) and that things needed to change. Huckabee ventured into populism, but it was populism with a heart. He honestly felt the pain of the voters, something that other Republicans couldn’t muster.

Taking on the Interest Groups: Huckabee didn’t back off of a fight, even with GOP-leaning interest groups. He got into tussles with the Club for Growth and with Americans For Tax Reform over tax policy, and he didn’t cower when they criticized his record on taxes. Instead he fought them to a draw, and showed that if elected, he would be a pragmatic problem-solver, not an ideological warrior.

Huckabee’s departure presents an opportunity to other candidates who want to supplant Romney as the front-runner. It is unlikely that the former Massachusetts governor will ever be able to appeal to the Walmart voters that were attracted to Mr. Huckabee. My guess is that Tim Pawlenty will be the biggest beneficiary of the Huckabee departure, although Michelle Bachmann could also make a play for those voters. In any event, every GOP candidate can learn something from the Huckabee example.