History at the Chicago Hilton and Towers 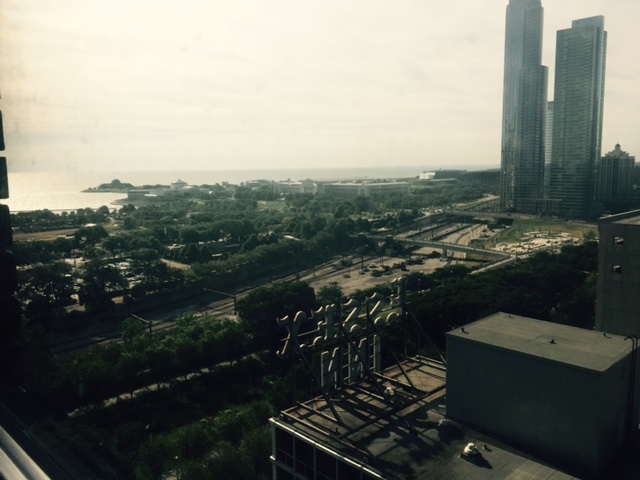 A front-runner decides to drop out of the Presidential race. A Vice President steps in to run. A hard left candidate excites the masses.

My son and I are staying at the Chicago Hilton and Towers, across from Grant Park on a guys trip. This was the official hotel of the 1968 Convention and the sight where large scale clashes occurred between Yippies and the Chicago Police force.

It was also the place where Lyndon Johnson announced that he was not going to run for re-election.

Johnson had run into fierce opposition for the prosecution of the Vietnam War and he was severely weakened. Robert Kennedy had announced that he was going to run against him and his Vice President, Hubert Humphrey, was chomping at the bit to run too.

I don’t want to overstate the parallels between then and now, but there are some.

Hillary Clinton is facing increasing scrutiny from law enforcement officials about her law-breaking on the email case. Her poll numbers are dropping like a stone. She may be the front-runner, like Lyndon Johnson, but it can’t be a comfortable place for her now.

Joe Biden, like Humphrey, is a happy warrior. He is an old-time liberal and as Vice President, he has the ability to marshal the necessary resources if he chooses to run. He is being deferential to the front-runner – unnecessarily so in my opinion –but should Clinton falter more, the door would be wipe open for the former long-time Delaware Senator.

And you cannot discount the challenge from the hard left. Kennedy carried the flag for them before he was gunned down by an assassin’s bullet, but that flag was picked up and carried by Eugene McCarthy. They are saying pretty much the same things as Bernie Sanders, about income inequality, about how the rich are screwing the poor, about mean-old Wall Street and all of the other leftist non-sense.

It’s fun to be staying at the same hotel where so much history played out decades ago. It’s especially fun to be here as Republicans gather in Cleveland to launch the first debate.

I will be at the Cubs game tonight (I hate the Cubs, but want to show my son Wrigley Field), so I will miss the debate. Let me know how it goes.