“Enemy of the State” Foreshadowed Snowden 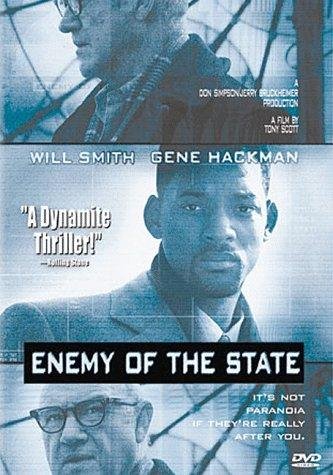 Everything I know about the National Security Agency, I learned by watching the movie Enemy of the State.

Will Smith stars as a labor attorney who mistakenly gets caught up with a whistleblower who knows too much about the nefarious activities of a high ranking NSA official, played by the always villainous Jon Voigt.

Voigt, parenthetically, is the father of Angelina Jolie, who apparently is a huge Ayn Rand fan.  But I digress.

The screenplay for the movie was written by David Marconi, who based his script on a book he read called, The Puzzle Palace, written by James Bamford.  In an interview in New York Magazine, Marconi said about the book, “he pretty much lays out everything that the NSA is doing now and has done for years. It was a massive eye opener. Anyone who was in any way paying attention to this stuff knew that the NSA was a big vacuum cleaner and that they were storing everything. This has been going on since World War II.”

Michael Hayden, the former NSA director, once watched Enemy of the State, and he knew it created a huge public relations problem for the Agency.   An article written by Zeke Miller of Time Magazine, put it this way:

“Former NSA Director Gen. Michael Hayden was promoted to head the agency as the movie came out, and was deeply worried about the public perception it created, James Risen reported in his 2006 book State of War: The Secret History of the C.I.A. and the Bush Administration. Hayden, who went on to become the director of the CIA under President George W. Bush, 'was appalled' by the NSA’s portrayal, and responded with a full-fledged PR campaign. The agency’s very existence was long a state secret. 'I made the judgment that we couldn’t survive with the popular impression of this agency being formed by the last Will Smith movie,' he told CNN in a segment pulling back the curtain on the agency.  'It has to be somewhat a secretive agency, and right in the middle of a political culture that just trusts two things most of all: power and secrecy,' he continued. 'That’s a challenge for us, and that’s why, frankly, we’re trying to explain what it is we do for America, how it is we follow the law. Could there be abuses? Of course. Would there be? I am looking you and the American people in the eye and saying: there are not.'"

Marconi said in the New York article that he was visited by the Agency and their friends:

“The Department of Defense asked me to come down and speak to them after the film came out. I met CIA guys and NSA guys. I found them all to be very professional. They were very focused on the mission and on defending the country. I didn’t walk away with a sense that any of them were malevolent. But some of them also had a very myopic view—here’s what you do, and you sit at your computer and you do it.  What you have is this machine that’s self-perpetuating. It starts to grow on its own, and the more power it gets, the more power it wants to assume. And as a result of the Patriot Act and 9/11, that apparatus is looking more and more at what’s going on inside this country.”

In the movie, it portrayed the State aggressively using the latest techniques to pry into the lives of private citizens.  Now, private citizens go out of their way to share their most private moments, not only with the State, but with the world.

We talk about privacy, but unless you live in a mountain cabin somewhere, most of us don’t practice what we preach.

And since the attacks of September 11th, most people would rather sacrifice some of their privacy for a whole lot of security.

Of course, that is not unusual.  Most Americans were fine with J. Edgar Hoover doing whatever he was doing, spying on Civil Rights Leaders, infiltrating communist cells, screwing around with Peace Activists and Hippies, as long as America could be protected from the Red Menace.

The Edward Snowden revelations have been both embarrassing and awe-inspiring.  Who knew we could listen in on the cell-phone conversations of leaders like Angela Merkel, for example?  That’s pretty impressive from a technical perspective, but also deeply embarrassing to our diplomats and insulting to our allies.

Google, Amazon, Facebook, Twitter, all the media companies and all the telco’s use big data to figure out who their customers are and how best to market to them.  It can be annoying and a bit frightening to immediately get ads targeted to you that clearly based on emails you just sent.

What Snowden has done with his massive data dump is to show that Big Government has a stake in Big Data, and that they use their technological abilities to sometimes spy on us.

What he has also done is jeopardize our national security by straining relations with our allies and giving too much information to our enemies.

The Snowden revelations have put the President on the defensive.

He came into office as a civil libertarian, a liberal with some pretty strong opinions about the true nature of America’s security apparatus.  But as President, he has largely continued the policies of his predecessor and he has grown to appreciate the power of the state when it is in his hands.

His liberal base has grown concerned that the President has gone “native” when it comes to the power of the state.  And that concern is shared by those from the libertarian right, aka as the black helicopter crowd, who have always seen the state of being too intrusive, too powerful and too willing to use that power to limit liberty.

But these days, it is not just the ideological wings of the parties that have grown concerned about the vast power of the NSA.  Distrust of the government has seeped inward, towards the middle of both parties,  and to many, Edward Snowden has become a folk hero.

I am not ready to attach that moniker to the young cyber-hacker.  My view is that if you have concerns about your job, you take those concerns to your boss or to the press.  You don’t take them to Vladimir Putin.

But Michael Hayden was right to be concerned about the Tony Scott movie.  I bet you I am not the only one who first learned about the extent of the NSA’s power from Enemy of the State.

It’s a great movie, and if you haven’t seen it before, check it out on Netflix, on your Samsung TV, which will likely have a camera attached to it.  I bet the NSA won’t be watching you watch them, but I wouldn’t put it past them.