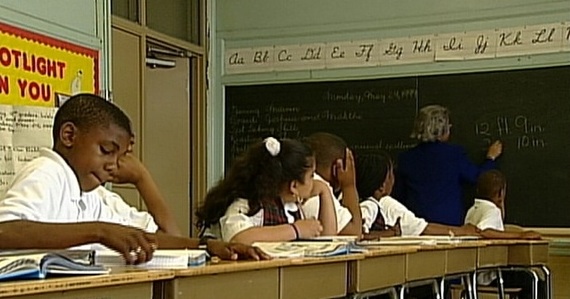 I was driving into work this morning, listening to Tim Farley’s always excellent morning show on the POTUS channel of XM/Sirius radio, as he interviewed Washington D.C.’s delegate to Congress, Eleanor Holmes Norton.

Eleanor lives in my neighborhood on Capitol Hill, and when you meet her in person, she can be rather pleasant.

But politically, she is a disaster. For example, she helped to deliver us Vincent Gray, the current joke of a Mayor in the nation’s capitol.

Holmes Norton – or Eleanor, as she is known by her campaign signs – likes to believe that D.C. is her own private domain that she can rule as she likes. She likes to think that despite she has no formal vote on the floor of the House of Representatives and no real power in Congress (other than the power to shoot off her mouth, which she does with great skill).

Eleanor (if I might be so bold) is fighting hard against legislation being pushed by House Speaker John Boehner. Boehner believes that kids from families that don’t have resources, but do have dreams should have the chance to go to private grade schools and high schools. He has long fought for a small program to provide scholarships to kids to give them that chance.

That program was quite successful. The two previous mayors in D.C. – Adrian Fenty and Anthony Williams – strongly supported it. But the teacher’s unions hated it.

They felt the same way about Michelle Rhee, the former head of the D.C school system, and now a national hero. So, they got Eleanor and other friends to prop up Vincent Gray as their candidate for Mayor, who promised them secretly to get rid of Rhee.

Both of those statements are so fanciful that even the normally unflappable Tim Farley had to correct the record after the interview. It was no secret that last year’s election turned on whether you liked Rhee or not. If you supported her school reforms, you voted for Fenty. If you thought she was a racist, you voted for Gray. Rhee, herself, made clear that if Fenty lost, she would quit. Fenty lost, and she quit.

It is also no secret that the teacher’s unions spent millions of dollars in support of Gray because they hated Fenty and Rhee so much.

This battle for D.C. scholarships is in one sense a proxy war for the bigger fight over the role of teacher’s unions.

But let’s not lose sight of the actual battle, which is to help kids who want a chance to escape terrible public schools made dramatically worse by the teacher’s unions, which make it impossible to fire terrible teachers.

Eleanor clearly cares more for the support of the unions than she does for the welfare of these kids and their families who simply want a chance at a better life.

She will continue her attacks on John Boehner and Joe Lieberman, calling them ideological and out of touch, but in truth, she is the one who tilts at ideological windmills and is out of touch with those families that want the chance to go to better schools.