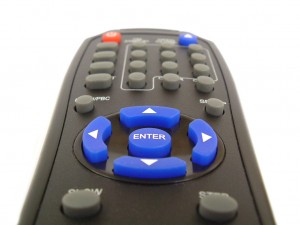 We live in a nation of control-freaks.

Everybody wants to be able to control his or her own lives in a world where America increasingly is not in control. We don’t control the Chinese or the Indians or the Europeans or anybody else for that matter. We barely can control our own budget.

We are used to controlling our environments. We don’t get hot any more, except for those rare moments where we go from our house to our car. We live in climate-controlled bliss.

Environmentalists believe that we control the weather with our actions. Put me down as a skeptic. I doubt the car that I drive has any control over the kinds of solar flares the Sun shoots off.

We have more control over what we watch on television than we ever did. And what are we watching? The intelligent shows? The well-acted, well-rehearsed, well-written shows? Nope. We are watching TMZ and the Real Housewives of Orange County.

Since we vote for the politicians, you would think that they would listen to us. The problem is, of course, that they are listening to us. And guess what, we don’t make any sense. We can’t continue to expect more and more services and pay less and less money.

And our lack of control is completely freaking us out.

We are a grumpy nation. The wrong-track, right-direction numbers have been upside down since 9/11.

The candidate that can best explain how he or she can give us back some sense of control over our daily lives will be the one who can best take on Barack Obama next November.

Two and half years ago, voters felt that by voting for Obama, they were doing the one thing that could make them feel better about themselves. By taking that simple vote, a sizeable majority of voters said to themselves, this is how I can take control over my own happiness, by making some history.

Now, those voters are wondering what the hell they were thinking. Obama hasn’t made the world any better. In fact, the misery index has skyrocketed since he took the oath of office.

In the this next election, the control-freaks are going to strike back and they are going to vote for the candidate who can tangibly outline how their agenda will give the voters more control over their daily lives.

This next election won’t be about the hopey-changy thing. It will be about control.