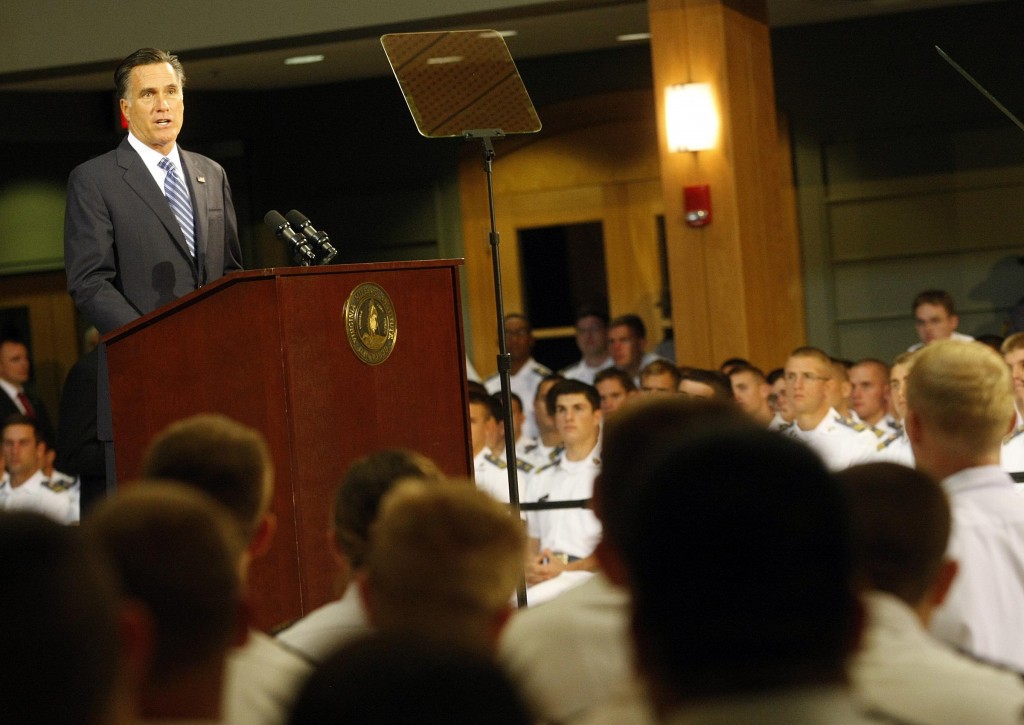 The press struggled to find much daylight between Romney and Obama on foreign policy.  Romney said we should increase the pressure on Iran through better sanctions, but Obama has largely done that.

Romney said we should support our friends and punish our enemies more forcefully, but he wouldn’t say that we should have kept Hosni Mubarek in power in Egypt.

Romney said that we should arm the rebels in Syria, but he wouldn’t go so far as commit American troops there, and there is widespread speculation that the CIA is covertly arming the opposition, although maybe not to the degree that Romney would want.

Romney wants to really support Israel.  He says that there shouldn’t be any daylight between Israeli policy and American policy.   In truth, there isn’t much daylight today between the two countries, but you can tell that Obama chafes at this realization.   The pissing match between Obama and Bibi Netanyahu is embarrassing for both countries, and it encourages the Iranians to hope that they can drive a wedge between the two nations.  But that won’t happen.

What Romney really promises in our foreign policy is greater clarity and less ambiguity.  Where Obama likes to play a more subtle game, Romney wants the rest of the world to know that he won’t play that game.  He won’t lead from behind, for example.

Sometimes, strategic ambiguity is a good thing.  Taiwan is prime example where the Chinese understand that if they try to invade the Island, we will back the Taiwanese government, but we don’t make a direct promise to keep the Taiwanese government in check so they don’t go half-cocked on their own and get us involved in a shooting war.

Obama campaigned to radically change the Bush doctrine on the war on terror, but in most ways, he has practiced continuity.  He said he would close Gitmo, but it is still open.  Most of the counter-intelligence programs that Obama campaigned against have been maintained.  Obama has used more drones then Bush.

The two places where Obama has kept his promises – Iraq and Afghanistan – have been failures.  Sure, we got out of Iraq, but since we left, the place is a basket case.  In Afghanistan, the fact that we have a politically designed deadline has only made our mission harder to achieve.   The Taliban and their allies are just waiting us out.

The fact that the Obama Administration leads from behind creates all kinds of complications in the Middle East, in China and in Russia.  Vladamir Putin doesn’t respect or fear Barack Obama.  The Chinese government may have been taken aback by Obama’s move to put troops in Darwin, Australia, but that move (which I wholeheartedly supported) had only a temporary impact.  The Chinese are pretty much doing what they want to do in the region, thumbing their nose at American power, threatening our Japanese allies, and treating less as a threat to be respected and more as a borrower that just might default on its debt.

And in the Middle East, all hell is breaking lose.  To be a friend of the United States is to be treated about the same as to be a foe of the United States.  Mubarek was our closest friend, and now he is on trial in Egypt.  Kaddafi was a foe and then became a friend, and he got murdered by his own people, with American help.  Assad hangs on, as his friends the Iranians and the Russians keep him in power.

American's interests do not change, even though administrations do change.