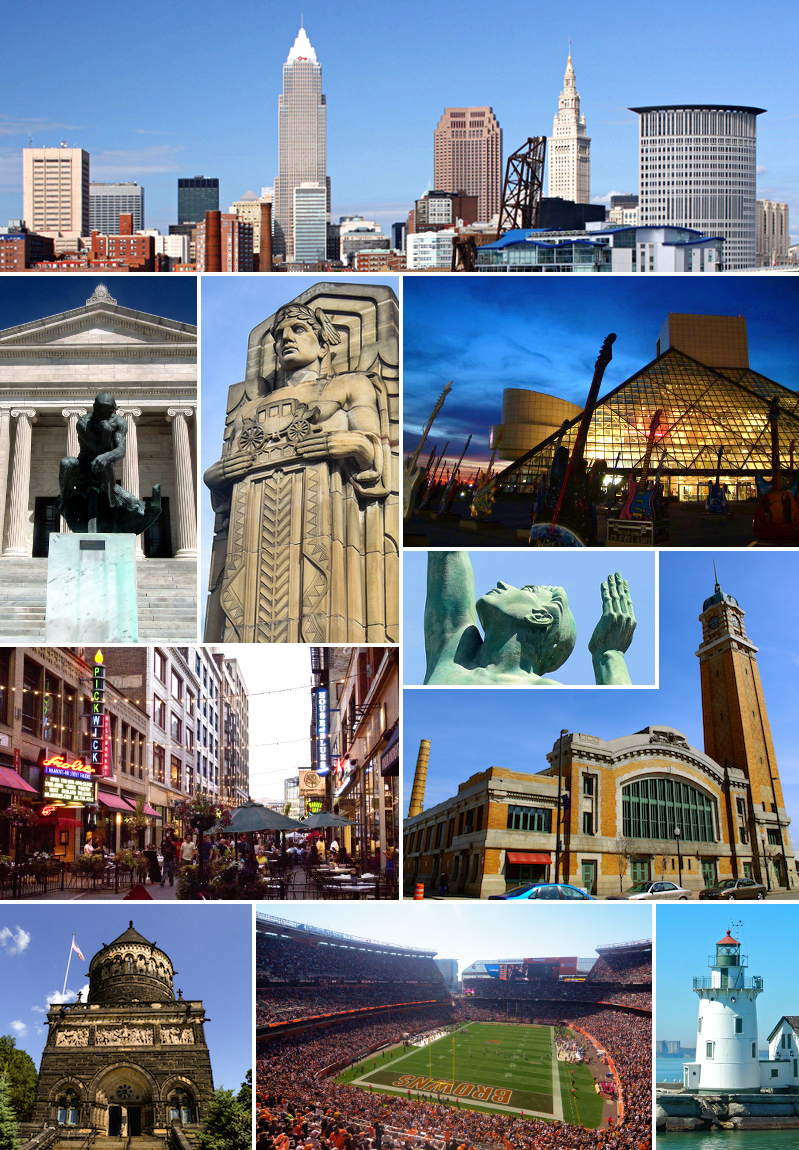 I am not going to Philadelphia.   Cleveland was enough for me.

I had fun in Cleveland. It’s a great town. As a convention site, it was perfect.

The people were nice, especially the locals.

The insane people outnumbered the sane.   But I guess that’s how it goes at conventions.

You get the sense that Cleveland is a city on the rebound. And goes beyond the fact that LeBron James came back and brought an NBA championship with him.

In the mid-1970s, after the Cuyahoga River caught first and the City declared bankruptcy, Cleveland was dubbed the “Mistake on the Lake.”

But walking around the downtown, the mistake now is to underestimate how bright the future can be for the people who live there.

Cleveland was founded in 1814, and it soon grew because of its favorable geographic location on the banks of Lake Erie. John Rockefeller founded Standard Oil Company in Cleveland in 1885 and soon the city became a major hub for all kinds of manufacturing activity.

What happened between the 1920’s and today encompasses the wide sweep of American history.   It’s a tale that includes many Northern Industrial cities.

The great migration from the Rural South of hundred of thousands of former slaves, coupled with the migration of whites from the cities to the suburbs, coincided with a slow but steady decline in manufacturing jobs.

Cleveland faced the brunt of that historic transition.

In the 1940’s and the 1950’s, Cleveland was toasted as one of the best places to do business. But by the 1980’s, when the city of was one the brink of coming completely apart at the seams, it didn’t seem that Cleveland would ever pull out of its tailspin.

That sports drought coincided all too perfectly with the city’s economic, social, and fiscal decline.

Like many other big cities, Cleveland faced huge riots in 1968, in protest of the assassination of Martin Luther King.  That intensified white flight, which took capitol, tax revenue and the bulk of the tax base with it.

It was probably no surprise that Carl Stokes became the first black Mayor of any major city that same year.

What has brought Cleveland back is a renewed commitment to urban living and a better economy based on human capital.

The biggest employer in the city is Cleveland Clinic, a world-class hospital recognized by U.S. News and World Report as one of the nation’s finest. Cleveland has moved on from the heavy industry that once typified the Rust Belt. It is now an information hub, buttressed by several universities and bio-tech firms.

In 1990, Cleveland was about 47% black. Today it is about 53% black, a rate that has stabilized as more Hispanics and more white people flock back into the city.

From 1980 to 1989, George Voinovich was the mayor, the last Republican to hold that office. Voinovich would later become Governor and a very successful tenure as Senator.

It was under Voinovich and Michael White that the city gradually started to turn things around.

Voinovich’s predecessor, Dennis Kucinich, represented that nadir of the city.   It was under the Boy Mayor’s leadership (as he was known) that the city defaulted on its debts. The shit really has to hit the fan before a population like Cleveland would turn to a Republican like Voinovich. Kucinich was Bernie Sanders before Bernie Sanders was Bernie Sanders.

Kucinich ran for President several times and garnered significant media attention for his efforts to create a Department of Peace to replace the Department of Defense during the Bush era.

His first run was in 2004, where he tried to push John Kerry to the left on several policy issues related to war and peace.

The 2004 Democratic convention was held in Boston. That too was a great town to have a convention. I actually went to it to provide counter-programming for the Republicans.

In 2000, I ventured to Philadelphia for the GOP Convention.

For the Democrats who are in Philly this week, I would imagine that they would see some of the same things that Republicans saw in Cleveland.

Both are sports-crazy towns that place considerable pride in their NFL teams. The Eagles have been almost as pathetic as the Browns in recent years.

Both are towns that dealt with changing demographics, with black migration into the city and white flight outside of it. Both also had to deal with changing economics, as manufacturers closed down their operations and moved to other locations.

Both Cleveland and Philadelphia have had issues with corruption in their police forces and with their politicians.

Philadelphia probably has more immigrants settling within their city limits, but both are very diverse places.

Both Cleveland and Philly had rough patches in the 1980’s. Philly almost went bankrupt.

Both have seen crime skyrocket, then go down and then come back up a bit.

Both had huge population growth in the 1960’s, and then steady deterioration in numbers, and then more recently, stable growth.

While it was George Voinovich who revitalized Cleveland, it was Ed Rendell who did the honors in the 1990’s, roughly around the same time.

In Cleveland, they built the new football stadium for the Browns and the Rock and Roll Hall of Fame. In Philadelphia, they built a new convention city, which helpfully housed the GOP Convention in 2000.

Both Cleveland and Philadelphia are moving past the racial and tribal divisions of the past, as young hipsters flood into the city, lured by its walkability and its urban vibe.

That is a good thing.

The GOP is the rural party but that’s not where the votes are.

The votes are in cities like Cleveland and Philly. People who live in cities like that want protection from crime. They don’t want their tax dollars wasted on the pet projects of politicians. They want good roads and good transportations systems. They want excellent educational opportunities, which create the good paying jobs of the future.

Donald Trump is the most urban nominee put forward by the party since Wendell Wilkie.

He gets big cities because he was born and raised in one.

He could get a lot of votes in the Big Cities of America. He is well-positioned to do so.