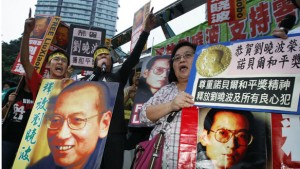 The Nobel Peace prize went to imprisoned Chinese dissident Liu Xiaobo, who was barred by the Chinese government from attending the ceremony. It was the first time since 1935 -- when the prize went to a winner imprisoned in one of Adolf Hitler's concentration camps -- that the Peace Prize winner did not appear personally to accept the award. Liu's absence was symbolized by an empty chair on stage.

The Chinese didn’t like this very much. They put pressure on 18 countries (according to NPR) to not attend the ceremony. They called it a Washington conspiracy.

As if Washington had enough pull with the world to pull off that kind of conspiracy. But, it is refreshing to see the rest of the globe start rebelling against the creeping hegemony of the Chinese Empire.

According the Examiner, President Obama released a statement on Mr. Liu where, predictably, he talked about himself. In fact, he talked about himself in remarkably glowing terms: “One year ago, I was humbled to receive the Nobel Peace Prize -- an award that speaks to our highest aspirations, and that has been claimed by giants of history and courageous advocates who have sacrificed for freedom and justice.”
While Mr. Obama may think of himself as a giant of history and a courageous advocate who sacrificed for freedom and justice, House Democrats are beginning to figure out that what Obama is sacrificing right now is them. And maybe the Great One has no choice but to do exactly that.

Mrs. Pelosi, the outgoing House Speaker, is all for sacrifice as long as somebody else is doing it. For example, she sacrificed about 63 of her members in an ill-fated attempt to pass Cap and Trade earlier this Congress.

She decided to take a quick trip to Oslo to see the Nobel Ceremony today, because, well, she really hates the Chinese. Can’t say I blame her too much on that one, but I do find it interesting that Pelosi can find time to fly off to Europe, but can’t find the time to schedule a vote on the tax compromise now advocated by the President.

Unlike in China, our political system encourages dissent. We are a nation of non-conformists, and that usually works well. It helps spur creative destruction, new ideas and a lot of energy.
In America, if you have a problem with the government, you get your own cable show. In China, you are thrown in jail for eleven years.

Too much conformity is China’s Achilles Heal. Too little conformity might be America’s.

It is all well and good to play politics, but eventually we have to come together and get some stuff done. Pelosi isn’t quite ready to do that yet, and that could lead to Obama’s undoing in two years.
This Nobel Prize is a real slap in the face of our Chinese friends, and let’s not kid ourselves, they deserve it.