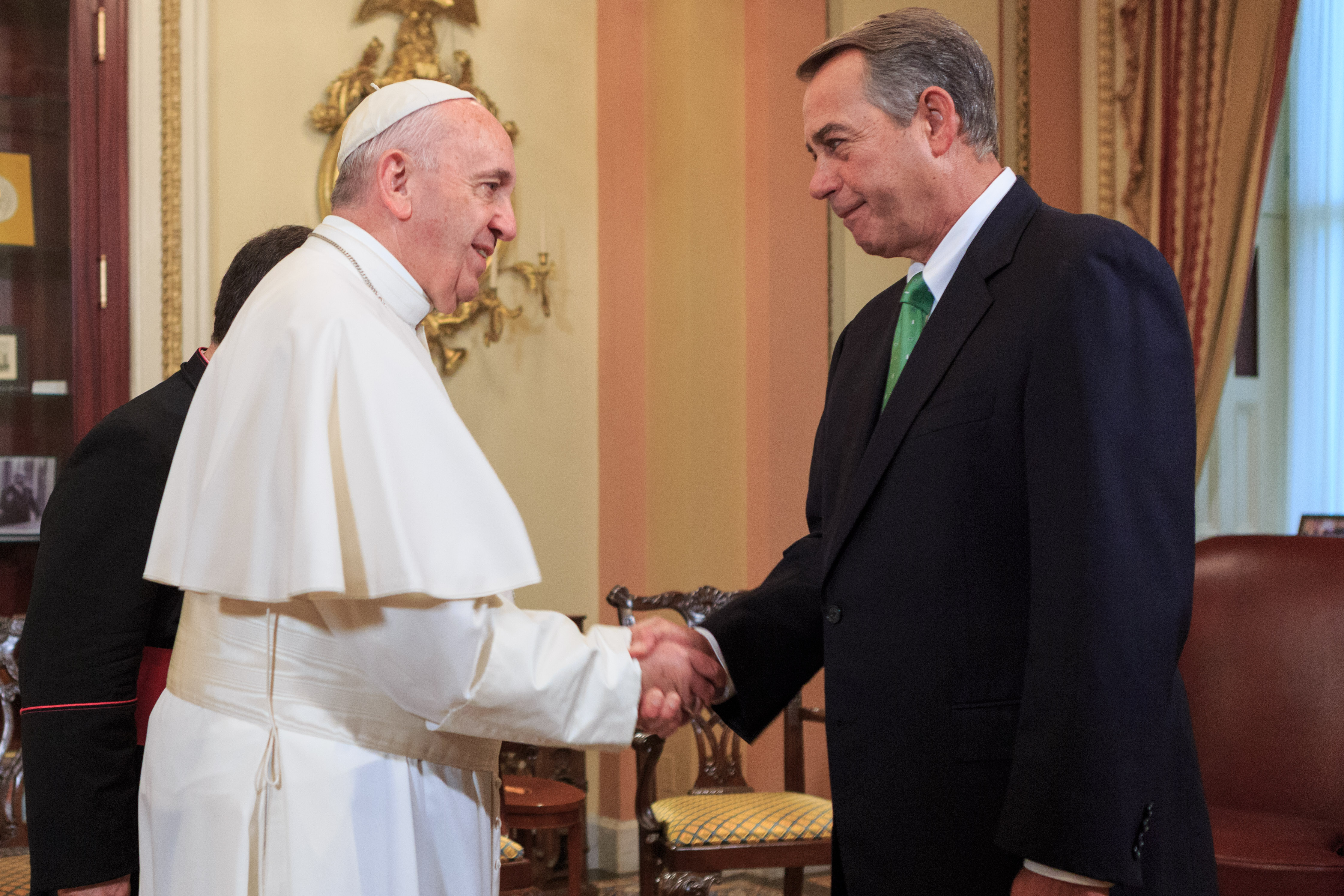 (Published in The Christian Science Monitor)

Lukens was a Republican lawmaker from the Cincinnati area who was accused of paying a mother money and gifts so that he could have sex with her 16 year old daughter.

Lukens was exonerated of those charges, but not before Boehner ran a successful primary campaign against him. Later, Lukens was caught sexually accosting a young African-American elevator operator in the United States Capitol and spent time in jail.

Lukens also got caught up in the House Bank Scandal and later spent time in jail for accepting bribes.

When John Boehner first arrived on Capitol Hill in 1991, the House was a cesspool.

For forty years, Democrats ran roughshod over the place, governing imperiously, certain of their own infallibility, violating ethics at every turn.

I had been working for Bob Michel for all of one year by the time Boehner arrived in Washington, and you could tell that change was going to come.

The South was turning, slowly but surely, from Democrat to Republican. The Democratic party was getting more and more liberal, and Catholics like Boehner were moving to the GOP. And the House of Representatives was becoming a national embarrassment.

Boehner, Rick Santorum, Jim Nussle, Scott Klug and a small cast of other characters came to the House in 1991, determined to change the place, determined to take back the majority.

Some Republicans had grown comfortable with their position. They didn’t like being in the minority, but they didn’t necessarily want to do things to change the status quo.

When Boehner and Nussle and their Gang of Seven decided to rip the band-aide off the festering wound that was the House of Representatives, it was a shock to the system. Nussle offended many old-timers when he put a paper bag over his head on the House Floor during a one-minute speech.

The Gang of Seven was Boehner’s first foray into the national spotlight. Good-looking, with piercing blue eyes, he was relentless in his criticism of the House Democratic leadership.

The GOP leadership was not exactly comfortable with the tactics employed by Boehner and his merry band of marauders. Some of them had bounced checks of their own.

It was a heady time to be on Capitol Hill. Not only did we have the scandals that dogged the House. We also had the Persian Gulf War and a Republican President who seemed much more interested in foreign policy than domestic issues.

Newt Gingrich, who had just recently become the Whip, launched a surprise attack against his own President during a budget drama, splitting the Republican Party down the middle, and sinking the fortunes of George H.W. Bush as he tried to run for reelection.

It was Bush who memorably said, “Read My Lips”, a promise that was unkeepable, it was later proven.

We in the House knew that Bush was in trouble, and we tried to help. Michel dispatched me to help organize Republican Members to go to the House floor and help the Bush team with one-minute speeches and Special Orders. We called it the Theme Team and John Boehner was one of the recruits.

Boehner wasn’t the most gifted one-minute speech maker, but he was willing to put his time in to help the cause.

He was gifted at hiring good staff. His chief of staff at the time, Barry Jackson, would later help Karl Rove organize the White House political shop. But after the disastrous election of 1992, where Republicans not only lost the White House but also made less than stellar gains in the House, Jackson and Boehner set out to win the House Majority.

Working with Dick Armey, Newt and DeLay, Boehner and his team helped to mastermind the Contract with America. The Michel team was a bit skeptical, and polls showed that nobody really had heard of it as they went into the polls, but the Contract gave Republicans a good agenda from which to work when they eventually did take the Majority in 1995.

Boehner rose quickly from backbencher to leadership in two terms, a huge jump that could only have happened in time of revolution. Despite the Ohioan’s inexperience, Boehner often found himself to be the voice of reason at a table of older, but more radical Members.

Boehner’s leadership was felt almost immediately in many different ways. The Boehner Beach Party made its debut at the 1996 Convention in San Diego and it would become a fixture of every convention afterward.

In one memorable exchange, Boehner told the new Speaker to shut up after he made more unfortunate news, something that Newt didn’t like too much. Nothing more offensive to an egomaniac like Newt than being told by a recent arrival to the House to shut your trap.

Boehner may or may not have been implicated in the coup against Newt in 1997, but no matter if he was involved or not, the whole episode exposed the deep cracks in the Leadership team.

One thing became clear. Boehner and DeLay didn’t care for one another.

Because of the confluence of history, I had found myself working for DeLay, but I never shared the animosity that some in the DeLay world felt towards Boehner. I liked him and his team.

When Newt resigned in 1998 and eventually, Denny Hastert found himself in the Speaker’s chair, Boehner found himself the odd man out. The GOP Conference wanted change. Armey fended off a challenge from Steve Largent and Jennifer Dunn, DeLay remained impregnable to any threat, but Boehner faced J.C. Watts.

DeLay threw his support to J.C., eager to ditch Boehner and secure power for himself. Watts and the Whip would clash often once J.C. got the job, but they agreed that throwing Boehner was what they wanted to do.

Many thought that Boehner was finished as a force in the House. But his years in the wilderness did not go to waste. He learned to be a legislator par excellence, and when George W. Bush ascended to the White House, he pushed through some of the President’s key policy objectives, including monumental education reform.

It was there that Boehner’s chief of staff, Paula Nowakowski, became a true force in the House. She learned how to manage staff, negotiate deals, extend outreach to the K Street community and otherwise become a terrific leader in her own right.

Paula would never see Boehner become the Speaker. She would die of a heart attack before the Majority would be claimed for the Republicans. It was a devastating blow to the future Speaker and to all those who lived in Boehnerland and for me personally.

I was never an official Member of Boehnerland. I never worked for the man, and I worked for some of his key rivals. But I had many close friends who worked for him and I felt a Midwest Catholic kinship to Boehner.

Ironically, not long after John became the Speaker, we moved right next door to his basement apartment and I got a chance to see his daily routine when he was in Washington.

Up early for a long walk to get some exercise. A stop at Starbucks for coffee. Breakfast at Pete’s Diner (not exactly gourmet food, mind you). A morning smoke. And then off to work (after a shower and shave, I presume).

During one memorable budget showdown, reporters and lobbyists would gather outside his place, wondering if he was going to negotiate to open the government. They speculated that if he wore golfing attire, the government would stay shut.

During another memorable moment, when my daughter was a new-born, a group of immigration activists gathered outside our house, singing protest songs and waking up my family.

But Boehner was a good neighbor. And it was nice to have his security detail hanging out, especially as crime started to rise on Capitol Hill.

The thing about John Boehner is that he is a normal guy. He likes to drink a glass of wine every once in a while. He is a smoker. He likes sports and is addicted to golf.

But he was a normal guy who came to the House of Representatives and wanted to make it better.

He came to the House through a scandal, so he knew the reality of personal behavior. He was tough when he needed to be. He had no patience for corruption or corrupt actors. He was more than willing to pressure his colleagues to quit if they embarrassed the institution.

I think that extended to his disdain of earmarks. He never took one when he was a Member and when he was elected Speaker, getting rid of earmarks was one of his top accomplishments.

Getting rid of them made it more difficult for him to do his job, but for Boehner, it was an essential part of cleaning up the House.

Boehner is also a committed and practicing Catholic. I think his faith grew even deeper after Paula’s untimely death.

He long fought to increase scholarship opportunities for African American children in charter and Catholic schools. He spent endless hours raising money to pay for those scholarships and he pushed the DC government to allow the kids' government-paid vouchers.

It was the day after his most impressive achievement, convincing Pope Francis to address a Joint Meeting of Congress, that he announced he was retiring.

At six in the morning the day that the Pope came to the Capitol, I saw Boehner getting ready for his morning coffee. We were going to the West Front to claim our seats to watch the Pontiff. He didn’t have to worry about the crowds, because he was the Speaker and he had security.

But he seemed moved that we were up so early to participate in the day that he helped to create.

Boehner is now walking off into the sunset, after cleaning up the barn (as he put it).

It seems like yesterday that I first met John Boehner, but it was more than two decades ago. It’s amazing how time flies when you are witnessing history.