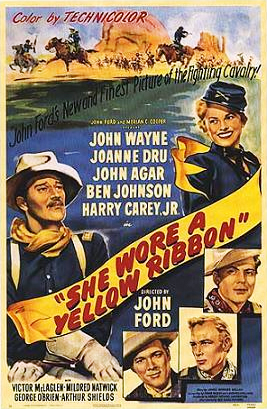 Brittles was the United States Army Captain, played memorably by John Wayne, in the Oscar-winning “She Wore A Yellow Ribbon.”

For those who have never watched the movie, Brittles is set to retire from the Army but has one last mission he has to accomplish – getting his Company Commander’s daughter to a stagecoach so she can get back east before the Indian Wars really heat up.

His squadron runs into a heavy attack and fails to make the connection. He is despondent as he returns to the base. “Only the man who commands can be blamed. It rests on me... mission failure!” he tells the Commander’s daughter as they march back on the base.

He is set to turn his command over to two young lieutenants, Flint Cohill and Ross Pennell. They seem about as green as the folks getting ready to replace Boehner in the House, and Brittles is worried.

In a particularly memorable scene, the two younger officers get into a fight over a girl, much to the exasperation of their senior commender. “Mr. Cohill, it is a bitter thing, indeed, to learn that an officer who has had nine years experience in the cavalry - the officer to whom I am surrendering command of this troop in two more days - should have so little grasp of leadership as to allow himself to be chivvied into a go at fisticuffs while 'Taps' still sounds over a brave man's grave! God help this troop when I'm gone.”

You can just see Boehner saying the something similar to McCarthy over his Benghazi comments.

Brittles is set to retire as the troop under the command of Cohill and Penell marches off to engage a restless Indian nation.

Instead of fading off into the sunset, Brittles, with time running down on his commission, decides to rush off to lead his troop one last time.   He devises a strategy, based on his years of experience and his strong connections, to run off the horses of the enemy combatants, avoids a full-scale war and saves the day and the lives of his fellow troopers.

Wouldn’t it be great if Boehner could do the same thing at the last second, rushing in to cut a deal that gets overwhelming support from both sides of the political aisle, avoids a government shut-down, gets the debt limit extended until after the election, maybe get a few other cats and dogs done, all while saving the political fortunes of the Republican Party.

There will be a vote for the next Speaker, and it might take a while to get that all sorted out.

It would be great if the current Speaker could pull off a Nathan Brittles and serve one last mission on behalf of the American people.  And then he can ride off into the sunset with head held high.