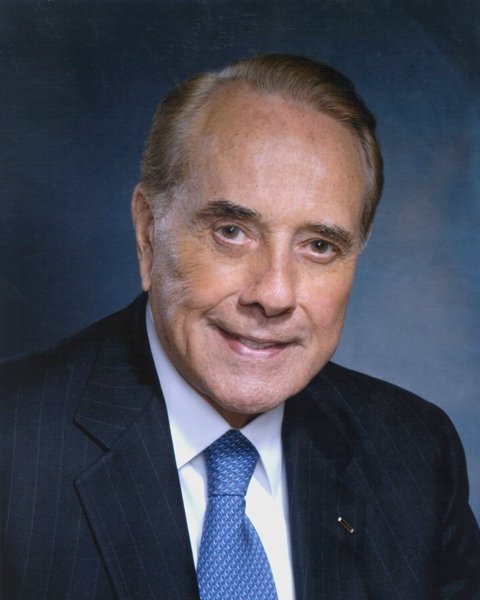 Few people can rival Bob Dole in his service to America.

In April of 1945, Dole was severely wounded during World War II in the Italian Alps, and lost the use of his right arm. His recovery was long, slow and painful.

Bob Dole has donated his life to America.

He is more than a public figure. He is the public face of patriotism.

Dole has not always been easy to characterize. His humor can be understated. He is as dry as the Kansas prairie in August.

As a long-time Senator, he often speaks Senatese. His campaign for the President had notably little lofty rhetoric attached to it.

As a son of the Depression, he shares that era’s antipathy towards debt. He was a skeptic of the supply-siders. For him, balancing the budget was the highest priority, a position that often contrasted with Ronald Reagan.

Dole wasn’t a disbeliever in the importance of government to the lives of the American people. He believed in limited government, yes, but that didn’t mean he didn’t believe in government.

It was Dole who cut the deal to reform Social Security and preserve it for generations.

When I worked in the House, Dole was an almost mythic figure. He didn’t say much in meetings, especially when they included Newt Gingrich. You could almost see the contempt seeping from his eyes when he looked at Gingrich and his blathering.

Michel never had it in him to run for President, but Dole obviously did.

In 1996, Dole finally got the Republican nomination that he long desired. Unfortunately for him, 96 was not a great year for the GOP. Bill Clinton proved to be a better politician than the older war hero.

Clinton also had some legislative successes, like welfare reform and a balanced budget agreement that somehow made him a centrist in the eyes of the voters.

And Clinton was helped by the GOP insistence in shutting the government down for a long stretch of time the year before the Presidential campaign.

Dole lost in 1996. He tried everything to win, including putting Jack Kemp, his ideological rival who cared nothing about deficits, on the ticket.

Dole’s loss was no shame. It’s hard to beat an incumbent President.

But for the hard right, Bob Dole was not conservative enough and that is why he lost in his quest for the White House. It was all non-sense, but it became gospel to the loony caucus.

One of the proud members of that caucus is Ted Cruz.

Cruz is now vying for the Republican nomination for the White House.

Cruz belittles Bob Dole in his campaign rhetoric. He accuses Dole of not standing by Republican principles and by not drawing a clear-enough contrast with the Democrats.

That’s not true of course. Dole has always stood by his principles. It is Cruz who blows with whatever political wind happens to be exhaling from Rush Limbaugh’s mouth.

That’s not Bob Dole’s definition of courage. For Dole, courage is serving your country in wartime. Courage is fighting back from near-fatal war wounds. Courage is opening the government when your right-wing colleagues demand that you keep it closed. Courage is looking first to the needs of the country and last to your own personal concerns.

Bob Dole said the other day that it would be cataclysmic if Ted Cruz got the Republican nomination. He called Cruz an “extremist” that nobody likes in the Senate.

Dole is not a doddering old fool who is just saying what comes to his mind. He has a keen mind and he is a sharp observer of the political arena, even at his age.

Republicans voters should listen to him.  He is a real hero and he is deserving of our respect and admiration.